Thoughts of Viet Nam keep returning in his dreams.  Some memories are clear but others are confused, especially about why the Footloose Forester was there, in the first place. And sometimes he gets the places mixed up, so that a remembered tale turns out to be the right, vivid episode but in the wrong place.  Such is the case about his night time arrival at Tuy Hoa Airbase in 1968.

A thriller of a helicopter ride with a Marine pilot out of Tuy Hoa Airbase the next morning was that vivid recollection.  The “Mr. Roberts” type of cowboy pilot took off in his Huey slick at the edge of the regular runway, just like he was taking off in a jet. That is to say, he didn’t work the stick to rise up vertically at take-off, but zoomed forward down the runway a few feet off the deck; and when we reached the end of the tarmac, he pitched the craft forward and downward to just above the tops of the rice fields below the runway. The Footloose Forester didn’t know at that time that the Tuy Hoa airfield was built on a minor plateau.

We skimmed along the rice fields until it was clear that we were below the level of the village he was headed for. The Footloose Forester remembers looking up into the bottom floor of a hut and seeing daylight through the back of the hut. Cowboy Roberts suddenly rotored up and we just cleared the tree line; then he abruptly dropped the Huey back down again to the level of the rice fields on the other side of the small village. The cowboy smiled, having obtained complete surprise with his flight path and with his little game with greenies in Viet Nam. He then confided to the two of us in the cabin that the routine he used was to make us a downward target, just in case someone in the village wanted to shoot at us. That way, we wouldn't have as far to fall. 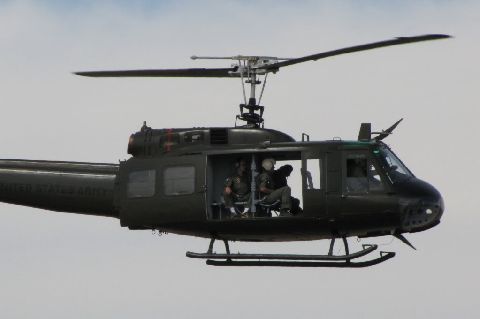 It would be 44 years later before the Footloose Forester revisited the runway at Tuy Hoa in order to relive the thrill of taking off from a blacktopped runway and dropping down to just above the emerald green tops of the planted rice. The passage of time and the checking of his recollections with a bit of research also led to a correction.  Thanks to Google Earth, he now knew that the place he had originally described as Phu Bai was not confirmed by the photographic evidence.  Upon checking the position of the airport terminal, the rice fields and the small village off to the right; he discovered that all the evidence confirmed that it was Tuy Hoa and not Phu Bai.

The return to the Tuy Hoa runway and virtual flight over the rice fields this time; however, wasn’t reliving the front seat ride in a US Marine Huey, but in the computer embedded SR-22 flight simulator of Google Earth.  By aligning the SR-22 simulator into the take-off pattern on Runway 21R at coordinates N 13°03′ 38.80″ and E 109°20′ 34.08″ and easing off the runway, the present day satellite photos of the still active airfield confirmed that the rice fields are still there; and that the tiny village is still intact. And the Footloose Forester can still see the light shining through the back of that hut on the ridge line.

Kabul Was Not A Tourist Haven
Easter Memories - This is where I hope I'll be som...