Of the many lucky breaks that made life a lot simpler and saved a ton of money at the same time, going to Guam was one of them. It really was planning, and not luck that led Footloose Forester and his new wife Thu to choose Guam as the place where she would take her examination for American citizenship. Most of the Vietnamese girls who married American servicemen during the Viet Nam War years went to Hawaii or even to the West Coast to take their citizenship exams. It was expensive and often meant that the person taking the exam had to remain there for a few weeks while they prepared. We had a different idea, so shortly after we were married, Footloose Forester applied to the Immigration and Naturalization Service in Guam for permission for her to take her citizenship exam there. Viet Nam to Guam was half as far as Hawaii, but up until a few days before the scheduled exam, Thu still didn’t have an exit visa from Viet Nam.  And Guam was over 2,500 miles away.

Well before we got word whether or not our application was approved, Thu starting studying for the test. The main emphasis had always been on the US Constitution, the workings of government, the names and order of the US presidents, etc. She rose early each day to practice answering questions from a citizenship preparation manual, and Footloose Forester was immensely proud of her determination. Truth is sometimes stranger than fiction; thus it was that only a couple of days before the scheduled exam date in early May, did we finally learn that her application for taking the exam in Guam had been accepted. We already had airplane tickets, purchased in advance in anticipation that everything would go well, but we had purposely left the departure day open. In those days the airlines were far more accommodating than they are today. The next big challenge was getting an exit visa from Viet Nam. Getting a visa to leave your own country was an unbelievably bureaucratic obstacle that the Vietnamese authorities imposed on its citizens.  It eventually would take 52 signatures to obtain her exit visa. Truth is stranger than fiction, indeed. Getting her exit visa is something we will never forget.

The unfolding process went something like this: When he got the telegram from Guam notifying him of the approved application for Thu’s citizenship exam, he immediately went to his boss and told him that he was leaving work early and may not come in the next day. That was about 2 PM on a Thursday afternoon. When he got home he told Thu to get ready to go downtown to the government offices and start the process of getting the exit visa. She bemoaned the fact that it might be impossible on such short notice; but he said that we would try right up to the last minute, if necessary.

We obtained several signatures that day, as we bounced from office to office late on a Thursday afternoon. The following morning we obtained several other signatures, but sometimes had to go back to the same office more than once.  Nevertheless, progress was slow but steady. The unbelievable amount of bureaucratic red tape prompted the Footloose Forester to keep track of the number of signatures they had obtained, as well as the number of office visits we had to make. The final tally he remembers was 52 signatures, obtained in 26 office visits. Some offices were visited only once, so that meant that they indeed had to go back to a few of them more than once. 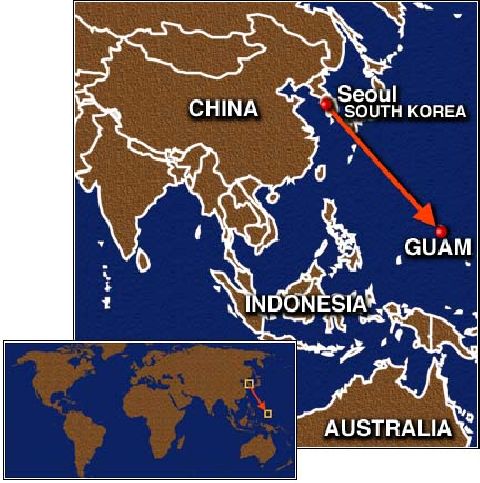 We were booked for a Saturday departure, but by Friday afternoon we still did not have all of the required signatures. Vietnamese government officials worked a half-day on Saturday, thus we knew that our hopes were still alive. Thu had to slip a little bribe here and there; but, lo and behold, about two hours before departure time on Saturday we got the last signature. Our bags were already packed and we had tickets at the ready. We went directly home for the bags and then rushed to the airport.

As the plane lifted off the runway at Tan Son Nhut, we were stunned that we had actually pulled it off.  But an old and apt expression comes to mind, “nothing ventured, nothing gained.” Luck was on our side but a bit of determination didn’t hurt. The citizenship exam was scheduled for a Monday, and we departed on the very last plane from Viet Nam that would put us in Agaña, Guam on time for the Monday test.

On the morning of the exam, Thu was so nervous that she could not even tell the examiner her name. There was a rash of white knuckles all around. The examiner told her to come back in the afternoon.  In the afternoon session, she settled down and gradually won him over with her quiet determination and commitment. As Footloose Forester stood nearby, the defining moment arrived.  In one last attempt to assess her command of English, he looked out the window and down to the street and asked, “What do you do see in the street?” When she answered “I see cars in the street” we both knew by the look on the examiner’s face that the crisis was over and that she would soon be an American citizen.

Nowadays, most people still believe that it takes at least 3 years of residence in the USA to even become eligible for taking the citizenship exam; and that the normal waiting period is 5 years. Thu became an American citizen in Guam less than 36 hours later. A day later, we picked up her American passport.

Why the incredible exception? The Footloose Forester previously took the time to read pertinent parts of immigration law in that regard; and knew that there were categories of exceptions. In fact, he was counting on such an exception. He also knew that although Guam was not the USA, it was an American territorial possession and was within the purview of the immigration laws.  As a contract employee working in a semi-permanent position overseas, he and his family were exempt from the minimum residency requirement. Thus, she was eligible. In fact, Thu was an American citizen even before she ever set foot in the United States. Even years later, however; some people thought that he was not telling the truth about her citizenship story; but it is a genuine part of her legacy.

Many thanks to Legacy Stories.org for making this story available for sharing. A high school friend who died only a week ago had admonished me some 15 years earlier, that we write about our family past, not for ourselves, but for others.

Many thanks to Legacy Stories.org for making this story available for sharing. A high school friend who died only a week ago had admonished me some 15 years earlier, that we write about our family past, not for ourselves, but for others.
Cancel Update Comment
Follow