Whiskey Creek Brush Camp: Getting Around

Weekends were always different.  As a practicing Catholic, the Footloose Forester tried to keep his obligation to attend Mass on Sunday.  In order to make it to Mass on time, that usually meant that he had to hitchhike 60 miles to town.  The “town” was Grangeville, the only place big enough to have a Catholic church.  Once or twice he wished that he did not have a religious obligation, but he had long ago accepted the fact that being a Catholic was not easy, if one were to keep faith in the manner that the Church expected of him.  Of course, there were a few times that he didn’t make it to church.  After all, he knew that as a hitchhiker, he could not know if and when he would get a ride. That is why he sometimes left camp after work on Friday, or early Saturday morning.  And that is why he always packed his sleeping bag and a change of clothes in his duffel bag.

More than once he slept on the side of the road, or in a field, or at the edge of the forest.  Getting a level, dry and private sleeping area was not a sure thing because the mountains were steep and often rocky.  But, truth be known, he delighted in the potential and actual adventures. The least popular place was on the side or the road because of the danger if someone coming along was not paying attention. The main road to Grangeville followed the South Fork of the Clearwater River for many miles, so there were no shoulders in most places. It was an unpaved road and that did not help, either. Finding a smooth place on a wide bend usually meant that you had to pick out the stones to make the spot smooth enough.

Fire fighting has always been an exciting proposition and a subject that would make for fascinating reading. The Footloose Forester did not get as much time on the fire line that he hoped, but forest fires were unscheduled.  It is very hard, dirty work but exactly the stuff of tall and taller stories that one likes to tell over a beer.  He would have a career with only modest experience as a fire fighter, but just enough for a few memoirs that might spur the imagination of readers.  One isolated memory is a good place to start.

The daily air patrol over the Nez Pearce National Forest during the fire season was one tool the feds used to monitor the fire situation in the region.  When a smoke or an active fire was detected by the aerial spotter, he radioed the fire control center at Headquarters, and they dispatched a crew to put it out. The fire control assignment went to the district in which the smoke or fire occurred; and the district personnel became the primary fire fighters, unless there was a major blaze and required crews from surrounding districts, and even from other states. That first fire was tame, as fires go.  It was a single smoldering top of a white fir tree.  About 100,000 fires occur in natural forests in the United States each year, and the vast majority of them are caused by lightning strikes. Our old-growth white fir was one of those lightening strikes. Generally speaking, the older the tree, the taller the tree, and the memorable first fire was a huge 300-400 year old tree that was at least 175 feet tall. Getting the stats close to the realities took some doing. When we finally isolated the solitary offender, we could not see the top of the tree while standing up close. Bill Magnusen, the young Junior Forester just out of the University of Minnesota who was in charge, made a decision to cut the tree down in order to put out the smoldering punk in the broken out top.  That would require, in his judgment, making a bed where we could drop the tree so that fire or sparks did not escape.  The operation would take three days.

As mature forest trees go, this one was a giant.  A few guys estimated that it was more than 100 inches in diameter.  The Footloose Forester has since seen only a handful of trees that were larger, except for redwoods and sequoias, during the remainder of his career. And because it was so tall, probably over 180 feet tall, it was a lightning rod that drew a strike. Bill and another crew member went back to Whiskey Creek Camp to get a cross-cut saw because our axes were not going to be sufficient to chop it down.  But before we started on the tree, we made the bed where Bill indicated that the tree should fall.  Of course, it had to be longer than 180 feet, just in case we miscalculated its height. 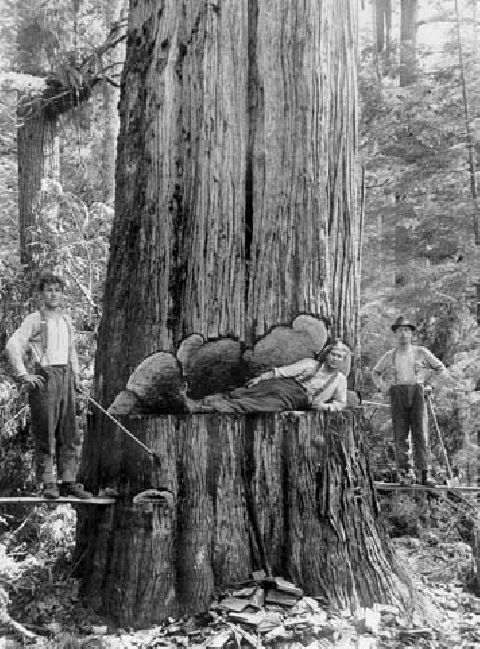 The white fir was nearly this big

Near the end of the second day, the crew had sawed through far enough to prepare the final steps.  Bill Magnusen told us to stand well back, and hooted the mandatory warning, “Timber!”  That sucker fell neatly into the bed that Bill had directed us to prepare.  We had a few feet to spare near the end of the bed where the smoldering top was still smoking. Putting out its dry punky top was quick and easy.  We never did confirm just how tall the old fir was, nor its true diameter. But Footloose Forester does remember lying across the stump to gauge its diameter by comparison with his own height. With his head lying even with the outer edge, his boots barely hung over the other edge. So, that made it five feet or more in diameter.