Remembering Elk City as it was does not serve any purpose in the present context.  First of all, there now is a paved road (Idaho State Road #14) leading from the outskirts of Grangeville to Elk City and beyond.  In the long hair days when Footloose Forester was a week-end visitor to Elk City, it was usually to sneak a beer or two from one of the two wild-west bars in town. He was a few months too young to buy beer on his own, but that was not a problem because anyone of legal age usually put a bottle in your hand, and nobody asked any questions. Make no mistake; Elk City was a bit too wild.

When a cowboy tried to ride his horse through the front door--that suggests wild.  When someone else fired his rifle in the air in front of the bar, that was wild.  When Footloose Forester was asked by the owner to put young Pete Byrum to bed because he was too drunk, and then Footloose had to hoist Pete on his shoulders to make his way through the small crowd of revelers enjoying a shiveree, that was too wild.  He does not remember the name of that place, but it was the one with the hitching rail, in the middle of town, in the old photos of Elk City he saw on the Internet.

There were two other “establishments” in town with hitching rails in front, and once, but only once, did Footloose Forester watch delightedly as two cowboys dismounted and hitched their horses before entering the general store, six shooters showing from their holsters. By their looks, they probably were not working cow punchers, but Footloose still got a charge out of witnessing a scene that was soon to disappear forever. Just imagine: two cowboys dismounting at the hitching rack, tying clove knots with the leather reins and moseying into the general store.  Yes, the horses had blanket rolls tucked neatly behind the saddles, but Footloose cannot remember if they were wearing spurs, or not. Probably not, otherwise that memory would also have been etched in his mind. 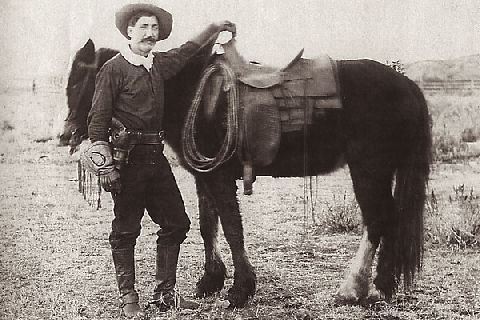 We summer employees from east of the Rockies did not have much business in any of the unpainted store-front buildings because we had our meals provided.  Food and lodging came out of our paychecks, so we accepted a fairly simple life style. Footloose Forester remembers opening his paycheck once and seeing that he cleared the princely sum of $78 for the month. Good thing he never put money at the top of his list of things that he considered as most important in life. None of us had a car for the first couple of months, so we were all in the same boat and had the same outlook regarding getting around and doing things.

One time, however, somebody local offered to take a few of us to Red River Hot Springs, about 25 miles from Elk City and closer to the Montana border. The place was a small resort with a quaint hotel built of logs. Hot water gushing from the side of a hill was piped into a large hot tub at the resort, and was the big attraction. The water temperature at the intake pipe was 125 degrees. It quickly melted the soreness out of your muscles and made you sleepy, just the ticket after a hard work week.  A few photos of Elk City, Red River Hot Springs and other places in the area can be seen on the world-wide web, but Footloose Forester confesses that multi-aged photos do not evoke the same sense of reminiscence as the snapshots in his mind. The photos and the short stories that accompany them do, however, confirm that the small settlements within a 40 mile radius of Elk City never exceeded 400 people. The latter day stories also confirm that places along the Clearwater River like Golden, a mile or so from where Footloose slept on a wide bend of the road one night, have been abandoned.  There really are ghost towns in his memories, and now Golden, Idaho is one of them.

How Did The Surveying Teacher Know Where The Canbe...
1976 The Teton Dam