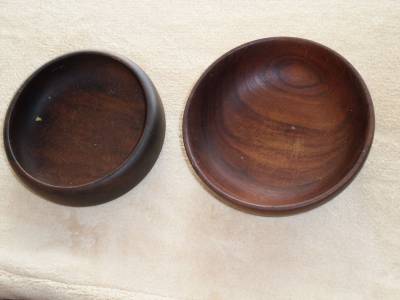 My grandfather loved to work in his shop repairing antique furniture and creating new things on his lathe. My aunt told me about walking into his shop one day; the radio was on and he was listening to opera. “How can you listen to that?” she asked. “Oh, but if you knew the story, it makes all the difference,” was his reply. He listened to the opera on Saturdays, the symphony on Sundays as he puttered about his woodworking shop.

I have some wooden salad bowls he created in that shop, his initials and date carved into the bottom. They are lovely, made of a wood with a beautiful grain.

Dad saw what his father had created and, on the eve of his marriage, wanted to make a gift for his bride-to-be, my mother. But he had something different in mind from what his father had done. He was determined to create salad bowls that had a lip, with inward curving edges. My grandfather insisted it was impossible to turn bowls in this manner on a lathe. Dad retold the story many times, of his father trying to prove to him that what he was attempting was impossible. “Look,” my grandfather would say, “I’ll show you.” He would then take wood ready for turning, put it on the lathe, attempt to create that inside curve, and the potential bowl would go flying against the wall. “See, you can’t do it,” my grandfather stated categorically.

Dad would then describe how he simply nodded, taking the wood he planned to form into a salad bowl, and proceeded to create the “Impossible” lip that curved inward on the top edge. He made an entire set of bowls of this type for Mom, as a wedding gift, and I grew up eating out of those wooden salad bowls. He always described them as bowls that “kept your salad from jumping out of the bowl onto the table.” It was clear that he had seen this as a problem when he ate out of the bowls his father had made, he’d thought of a solution, and didn’t give up till he accomplished what he’d set out to do.

Just a few years ago I helped my dad put together a book of stories of his growing up, his military experiences, his life with Mom and life with us kids. In the process of going through family records, I came across a box of letters, some from Dad to Mom—their courtship letters, and others from my grandfather to my father. I’d looked through them before. But it was only through the process of transcribing these letters for inclusion in Dad’s book that I felt I was able to get closer to the spirit of this man who was my grandfather.

The “voice” I heard as I typed out his letters was that of a man who cared deeply for his family. I picked up on his sense of humor, a gentle teasing sense of fun that earned him many friends. Through Dad’s letters I also gained a clearer picture of his loyalty, and his willingness to face difficult, and sometimes tragic events without flinching. Both father and son shared these character traits.

I was never quite sure what Dad was trying to tell me when he shared his story of making the salad bowls. But when I look at the two salad bowls side by side, I see creations made by two men, yes, made differently. Ultimately, both were made with care, with deep pride and careful worksmanship , and a determination to create something useful. In many ways, in the things that are most important, both men were much more alike than either of them were probably ever able to see.

My  grandfather, it turns out, was right. If you know the story, it makes all the difference in the world.

(The bowl on the left was one my dad made, the one on the right my grandfather created and signed.)

Memories of my parent's wedding
Caution: Composting in Progress