A glimpse of my grandmother, Po'Lady

My grandmother, Em Turner Merritt Nickinson, with her three children, 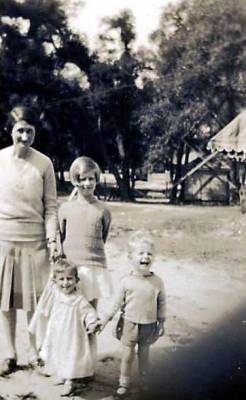 Betty, the oldest, Ted, far right and Em, my mother, as a toddler.

My grandmother, Em Turner Merritt Nickinson, was not your typical grandmother by any stretch of the imagination. When my family came to Pensacola each summer for a two week visit and stayed with her at her Pensacola Beach house, we thought nothing of our grandmother heading off to work every day while we headed out to the water to swim, ski, fish, sail and hang out with our multiple cousins. She returned in the late afternoon, pulled on her bathing suit and headed out to the water of Santa Rosa Sound for a dip in the water. She and my mother floated side by side, their feet crossed as they floated effortlessly in the salt water, chatting about whatever came to mind.

On occasion we ventured into “town” for a visit and always stopped at “the office” to say hello to my grandmother, who we called Po’Lady, so named by our oldest cousin Ben who, when quite young asked her to dance with him after she’d been at work all day. The story goes that her reply was that she was a poor old lady, and not up to dancing. Evidently that brought roars of laughter, since she was neither poor, nor very old, but she was certainly a lady. The name stuck.

My cousin Merritt and I always headed to the coffee corner of Po’Lady’s office and grabbed some sugar cubes. Shortly thereafter we headed out for lunch, where we invariably met more people we were related to. Where I grew up we had no family anywhere nearby. When we stayed in Pensacola I felt we were related to half of the town, and the rest of the town seemed to know us too!

Po’Lady died when I was seventeen, within a few years of her retirement. I never felt I got much chance to know her, so it was a sweet pleasure to read this interview(below), and hear some of the thoughts she shared looking back on her work life. She was deeply loyal to her family, and her work, both professional and civic endeavors—it was an intrinsic part of who she was. She passed that work ethic and passion on to all her children, grandchildren and great-grandchildren. She was a remarkable woman. I feel lucky to have known her, and pleased to discover this clipping among many my mother saved, which provides a glimpse of her life.

An uncredited interview with my grandmother, Mrs. E.P.Nickinson, Sr., known to many of us as “Po’Lady,” on the occasion of her retirement from leading the John A. Merritt & Company.

“Women’s lib? It’s old hat, really. Women can always contribute and do things if they want to!”

The quote was given with authority… and at an appropriate time.

It came from Mrs. E.P. Nickinson, on her last active day as executive vice-president and general manager of Pensacola’s John A. Merritt & Co., steamship agents and stevedores, a company dating back more than 75 years in Pensacola’s waterfront history.

On Dec. 22, she tidied the top of her large double desk, dictated final correspondence, then gathered up airline tickets to leave for Christmas with one of her children and some of her 12 grandchildren.

“Oh, I’m not really retiring,” she assured her staff. “There are still lots of things I will do. But it’s time to let the next generation take command.”

Mrs. Nick’s’ career with the steamship agency began in 1918, when she became a member of the office staff, working with her father and uncle.

“It was almost scandalous!” she admits. “I was the first woman ever to work here in relationship with the waterfront. It was unladylike, people said. But to me it was exciting…and in more the 50 years it never changed.”

A year later, she became the bride of a career naval officer, and for several years was absent from Pensacola.

Then in 1923, her husband retired, the family returned to the port city, and within a few years, “Mrs. Nick” was champing at the bit. “Quite honestly,” she confided, “I never liked housework. And when there was a chance to go back into the business…I jumped at it!”

Along the way she became an accomplished secretary, then a capable financial associate. In 1937, when John A. Merritt died, her uncle became the business head and Mrs. Nickinson’s responsibilities increased. A decade later she was made general manager.

Times have changed: so has the port and its business.

And Mrs. Nickinson is one who has seen the Pensacola port make the transition from wooden ships and cargoes of timber to, first, a vigorous Cuban and auto imports trade; and more recently, the development of a whole new concept in world commerce and new docks.

“I’ve always enjoyed the contacts, the excitement of world trade,” she admitted. “We’ve had countless relationships with people from all over the world. What other business could have provided this?”

She remains active also in the area USO, the Pensacola Historical Museum and the Junior League.

What will she do now?

“Oh, I’ll still have a desk here, and will be a director and advisor. But Ted (her son, E.P. Nickinson, Jr.) and Mike (Mike Merritt) are ready to take over my role. I may still help with the Welfare Fund too. There’ll be lots to do. I don’t plan to take up knitting!”

Sharp of eye, keen of wit, Mrs. Nickinson will never really retire. She has made contributions to her business, the port and this community that serve as a model to men and women alike.

She’s stepping down—but not out.

The Beatles and Liverpool
Reo and Janice Carson

What a role model, your grandmother! Thank you for the lovely tribute shared. I know you are wishing she could have lived a bit longer for you to spend some time with her.

What a role model, your grandmother! Thank you for the lovely tribute shared. I know you are wishing she could have lived a bit longer for you to spend some time with her.
Cancel Update Comment

Thanks for reading! Yes, Patricia, you're quite right, I do see many missed opportunities in getting to know this grandmother better, as well as other beloved family members. It was such a sweet feeling to read my grandmother's words in this interview. It was a side of her I never had a chance to experience.

Thanks for reading! Yes, Patricia, you're quite right, I do see many missed opportunities in getting to know this grandmother better, as well as other beloved family members. It was such a sweet feeling to read my grandmother's words in this interview. It was a side of her I never had a chance to experience.
Cancel Update Comment
Follow