“Do you remember asking me about Santa Claus?” my dad asked. Dad sat in his favorite, green chair, and I had pulled up a chair next to him in the living room of his apartment in the retirement home where he lived. He had lived to an old age, and our most pleasant pastime was to sit together and talk.

“It was just before church one day, you were about four. You had just seen Santa walk into church to visit the children in Sunday School and asked me if Santa was real.” He paused. “Of course, there’s absolutely no religious significance to Santa.” He continued, “I told you that Santa was very real and that he was there for entertainment for young children. And there’s absolutely nothing wrong with that.”

Dad always had a unique concept of what constituted entertainment. When I was growing up, Dad’s usual Saturday routine was to bake bread. Throughout the day, as he repaired things that needed fixing around our house, he would check on the progress of his bread. Stopping by as he was kneading the dough, I often asked him for my own piece so I could work by his side. We kneaded our dough together; what a fond memory this is for me.

When the smell of baking bread filled our house, my siblings and I stayed near the kitchen, making sure we didn’t miss the moment the bread came out of the oven. There were five of us, and the first two kids in line usually requested the heels of the bread, the parts with the crustiest crunch. Chunks of butter melted quickly on the hot, freshly cut slices of bread. We couldn’t wait to sink our teeth into the soft-on–the-inside, crunchy-on-the-outside treat. The warm loaf tended to squash as we sawed away with the bread knife.

There was usually little left of that first loaf by the time we’d had our fill. Dad always said, “It’s a good thing there’s a second loaf.” We could tell he was pleased. The second loaf was for sandwiches, the first loaf, well, that loaf of bread was for entertainment.

One day Mom brought home an elderly friend, someone she often looked after. Could Dad entertain Jean while she ran an errand? But of course.

He kept Jean in stitches for the next few hours by baking bread. Dad added narrative to the same steps he took each Saturday as we kids were growing up, demonstrating as he went along. He moved the clutter from the kitchen counter and explained, “First you have to clear off a piece of counter.” Pulling out the bread bowl, he noted that every thing needed to “go in a pot.” He continued, “And now, for the milk,” as he tilted some very dry powdered milk into the bowl. He ran water in the sink till it was hot, then held the bowl under the faucet. “There, we measured two cups very carefully,” he said with a sly smile. Yeast was “the stuff that makes it go poof,” flour was “wheat,” and sugar was “honey.” He poured “butter” (cooking oil) into what would eventually become his delicious bread., Dad put his gentle humorous twist on the recipe with each added ingredient, and Mom’s friend Jean gasped for breath, she laughed so hard.

Upon her return, Mom was astounded at how Dad had entertained Jean. Not just entertained; Jean was near hysterics with his understated antics and the twinkle in his eye. And yes, the bread, as usual, was delicious.

Dad spent the last years of his life as a widower in a retirement community. He had little use for the “entertainment” offered to residents; movies, card games, bowling, and such. He entertained himself by cooking, and neighbors often stopped by to see what he was making that day. And yes, sometimes he baked bread, keeping the door open as a quiet invitation for folks to stop by. He was always pleased when someone poked their head inside and asked, “What are you baking?”

For some people, entertainment is merely a diversion from the dreariness of daily life. But for Dad, it was a tool for connecting with others, with laughter a welcome side benefit. He taught this lesson to me when I was very young, and modeled it the rest of his life. I’ve been told I’m easily entertained. But, as Dad taught me, there’s absolutely nothing wrong with that. 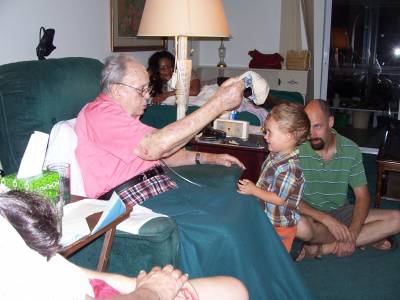 Here'a a photo of Dad in his favorite green chair, with my son, Caleb, and his son, Liam, Dad's great-grandson. Caleb brought his family for one last visit before Dad died, and even when Dad was so ill, he had had not forgotten how to gently play with a little boy.