Greece was on his bucket list of places to see well before the popular concept of “things to do and things to see before one kicks the bucket” was made into a movie.  As a teenager, he sometimes taunted his mother with the expression “it’s time for me to agitate the gravel.”  That usually signified that he was ready to return to college, starting out on foot but most often by hitchhiking to his destination.  In those days quite a few people hitched back and forth, and he sometimes forgets that he also hitched from Netcong, New Jersey to California in 10 days.  By way of reflection, and only years later, did he decide to call himself the Footloose Forester. But having a personal bucket list was always in the back of his mind.  Visiting Greece was always on that list.

Athens is a remarkably clean city, at least which is the way he remembers it.  He walked for miles each day, so saw enough to have that observation stick in his memory.  He did not always know where he was going; and most of the time it did not matter. Part of the mystery of discovery was the serendipity factor. Serendipity, an unexpected but pleasant discovery, was part of the adventure-seeking process and part of the fun, enjoyed retrospectively. Coming upon something that you were not looking for is a bigger surprise than going directly to a venue where you already know what to expect. 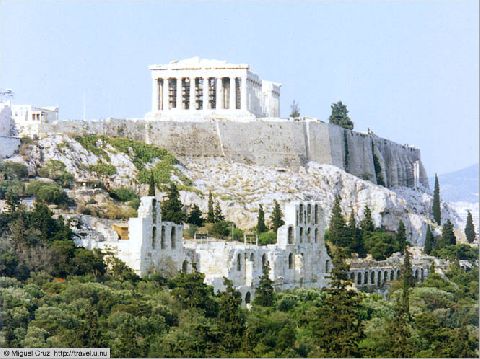 The Acropolis of Athens

To be sure, he visited some of the famous sites. The Acropolis was one of them; it is still magnificent and imposing, perched as it is on a tall limestone hill overlooking Athens.  The columns and partial roof are still remarkably strong, even after more than a thousand years. But the Parthenon in another part of the city is almost completely intact, even though its state of preservation does not elicit as much commentary regarding its magnificence. The Footloose Forester spent several hours there and among various ruins, reluctant to leave before absorbing as much history as he could.

One impression that he remembers was the low number of visitors to various ruins, except for the Acropolis. At one point, he was walking along an ancient roadway that was paved with thousands of small marble rectangular tiles, with dimensions of approximately one inch by 2.5 inches.  He was sorely tempted to lift one or two of them out and take them home as souvenirs.  More than a few of them were loose and would easily fit into a pocket.  And there was nobody around!  His conscience kept him from pocketing a part of ancient history, but he will always remember the temptation.

Come And Sit, Friends And Neighbors