Some farmers around the world think of themselves as unskilled peasants.  On the other hand, some city dwellers think of farmers as providers of the riches of the land.  The land itself can be a bounteous provider, but it does not just happen. In principle, it requires that we hungry humans assume a positive attitude about growing things in order to meet our daily needs.  Whether or not everyone thinks about their individual attitudes in regard to growing things, everyone falls into one or more of three categories of personal attitude.  Those that:

In the case of forest crops, however, laymen typically have a let it happen attitude because most of the world’s forests evolved naturally. Foresters are different in this regard.  Dedicated foresters often display all three attitudes.  Let it happen, in regard to natural forests and their management; help it happen with respect to pest and insect control; and make it happen when plantations and afforestation campaigns are called for. In a few situations, all three attitudes occur on the same property. The payoff is a sense of acting as good stewards of the land, even if laymen are not paying attention.

The idea for this missive came to the Footloose Forester in a dream, and he decided to act on it. Invariably, there are key elements in his typical chronicle compositions; and it has been his desire to chronicle certain past events, observations, revelations, and epiphanies that have lately occupied his waking thoughts. To get things right, however; some of the information has to be researched in order to be acceptable fare.

The Footloose Forester often lamented the lost opportunities when he observed that local farmers were missing some sure bets when it came to the successful planting of vegetables, fruits and forest trees. Seeing it and relating it were different propositions, however. There usually was nobody around to shout in your ear or theirs, for example; that the okra you see in the neat rows and well-watered beds in fertile volcanic soil is going to waste because the people who planted it do not understand that is has to be picked early, while the outer skin is green. Thus, a corruption of the make it happen attitude about planting okra can lead to a worthless product, if some people just let it happen. On the other hand, nurturing the crop with due diligence and a make it happen attitude could lead to quality okra, instead of the worthless crop that often results.

As another example, people who buy green-looking pineapples might as well eat them just as soon as they can, because pineapples do not change in sugar content when they sit around. The only change in taste in yellowed pineapples comes from a chemical transformation of the fruit as compounds known as esters begin to assert themselves.

When it comes to trees, the Blue Mahoe tree that is native to Jamaica is a fantastic plantation species in Haiti, but almost nobody except a few botanists there know about its superior performance. More plantations of Blue Mahoe would mean taller, straighter trees in less time; and the quality of the wood is superior to many of its native associates.  Sadly, most of the locals just accept the scrub vegetation around them, so exhibit a let it happen attitude. Very few innovators try to change the status quo by growing things like Blue Mahoe. Richer forest stands might result if they make it happen.  Every nation could benefit from having a critical mass of informed innovators.

Around our house, the green thumbed wife of the Footloose Forester makes it happen with a variety of annual crops; and with fruit trees.  She once planted seed from a bag of purchased cherries and, a few years later, harvested Rainier cherries from the tree that grew from cherry seeds she had saved and nurtured.

The remarkable thing was the fact that she had a Rainier Cherry growing in her yard in Pennsylvania, thousands of miles from the cherry growing region of Washington where that variety was developed. Furthermore, it was probably the only Rainier Cherry tree anywhere in the Commonwealth of Pennsylvania. That particular episode does not end there. The cherry tree occupied the very same spot in the yard where a peach tree had stood for more that a decade. After the peach tree died, she chose that spot because there was limited space in the yard that would allow for a fruit tree with a full canopy; and on level land.  On the shale bank nearby, the dry rocky soil would support grape vines, but it was not ideal for fruit trees.

A few years ago, my Bengal Tiger of a horticulturist chose seeds from a persimmon that she had eaten;  then dried them on the window sill until they were ready to grow into another kind of tree that did not occur naturally in our region.  In all likelihood, the persimmon variety she selected came from California.  After the nurtured persimmon seeds began to develop roots; and conditions were proper for outplanting, she planted the best sapling in the back yard.  There it thrived for 2-3 more years, until we moved to Virginia.  There was no question, of course; that she intended to dig it up and transport it in the back of a moving van to our new home in Virginia.  Which she did!

After a full year in the ground at its new location on the Eastern Shore of Chesapeake Bay, the California persimmon survived a full winter and had strengthed its root system.  Somewhat unexpectedly, it also produced 6-8 large and well-formed fruits in year two. But the harvest in year three was spectacular.  We harvested over 90 healthy fruits from the two young trees that border our driveway.  The second tree had been purchased in a Pennsylvania garden center, but it was also dug up and transplanted when we moved to Virginia. transplanted persimmon that yielded 6-8 fruits in 2012

In the photos, the evidence points to the success of our transplanting gamble; and to another case whereby the Bengal Tiger proved that you can enjoy eating Rainier cherries and California persimmons in one season, then pick them from your own trees in subquent years. this is the persimmon grown from seed, prior to ripening in 2013 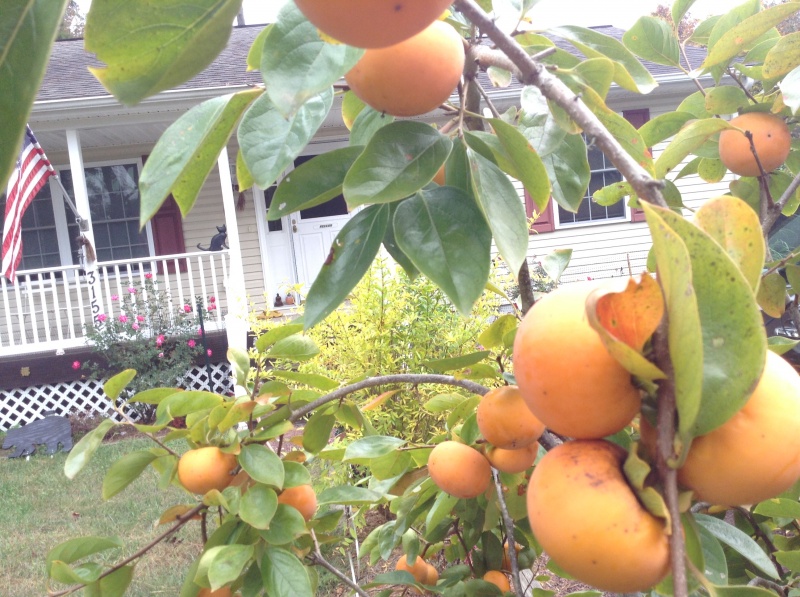