On the one hand, you have those who believe in global warming; and on the other side of the divide are those who are currently labeled as climate change deniers.  In the middle are those who believe that although climate change is real, the earth has always experienced natural climate change, so we should not be alarmed at the purported warming phase that most climatologists claim to monitor and document as our current state of affairs.  But we can all agree that wild swings in weather patterns affect us in more ways than we may realize.  Along the way, we always have to distinguish the real differences between what is due to weather and what is due to climate.

Local weather is just about the only thing we can grasp as relevant to our daily lives. Part of the problem is our short attention span, and part of it is about the complexity of categorical climate indicators.  For the moment, at least; forget about the long term fluctuations in climate and consider how daily weather patterns in our own regions of the country affect our daily lives.

There are big differences in temperature between northern and southern states of the United States, for example; and such differences have impacts in the way our houses are built, how our roadways are maintained, and how we conduct our everyday lives. Temperature differentials and how they define our lifestyles are most pronounced in winter months.  The prospects of snow and ice in northern regions make for night-and-day comparisons with southern regions that may never or seldom experience such conditions.  Temperature differences are merely the most obvious of the several factors germane to both weather and climate, but there are others to consider.  Together with wind patterns, precipitation, barometric pressure, and relative humidity; the overarching feature of our local weather is the fact that various regions of the country truly do have different climates.

Seldom do the folks who report the weather on a daily basis even mention the concept of climates as regards the United States as a whole; much less as a feature which partly defines various regions of the country.  There are, nonetheless; several different climates in the United States.

A few obvious examples may suffice.  The presumed daily weather in Hawaii is perhaps so implicitly known that it is not really necessary to say that the overall tropical climate of the Hawaiian Islands into which its daily weather patterns are embodied is fundamentally different from all of the other states of the United States. Yet, within the narrow limits of a temperature range of only a few degrees (also described as an isohyperthermic condition) of large expanses of land at sea level in the Hawaiian Islands, there are other factors that affect the site microclimates within the many and varied landscapes. Rainfall and wind patterns are chief among those factors. That is where the gross generalities describing daily weather and climate get blurred.  Whereas the concept of regional climate identifiers has not been too important in mundane discussions, the issue of site microclimate on a landscape basis has a sound scientific basis in helping describe how and why there are obvious differences in the existence and appearance of such disparate landscapes as forest, steppe, tundra, and desert. This discussion will be limited to only a few examples, but ones that are obvious enough to be appreciated by laymen who merely observe them without having to take measures to verify the concepts.  The first and easiest example of a microclimate effect to perhaps contemplate is that of a rain shadow.

When one looks out from the balcony of a tall hotel in the Waikiki District of Honolulu towards the Ko‘olau Range to the northeast, it is easy to see that the native vegetation on the range of mountains grades from dark green to ever lighter hues of green.  Depending upon the time of year, the color gradation may even change from green to brown, especially in the vicinity of the St. Louis Ridge, overlooking Manoa Valley where the University of Hawaii is situated. The drastic color change is due largely to the ever lessening amount of rainfall that hits the ground to water the plants. Whereas the average annual measured rainfall at the top of the Ko‘olau Ridge may typically be 60-80 inches per year; upper Manoa Valley has approximately 40-60 inches; the lower part of Manoa may get only 30-40 inches per year; and by the time the remaining rainfall reaches Waikiki, its annual amount is in the 10-20 inches per year range.  This is the rain shadow effect.

Although the top of the Ko‘olau Ridge to Waikiki is only a few miles, the average annual rainfall varies greatly.  One might surmise that Waikiki is relatively dry while the Ko‘olaus are relatively wet.  Between those extremes, one may also surmise that there is a visible line where the vegetation stays green year-round and where it changes from green to brown when the rainfall is insufficient to maintain a uniform green color.  The more-or-less distinct line formed in the dry season is a feature of the rain shadow effect, and it is real.

Rain shadows and snow shadows occur in other parts of the United States, although the weather broadcasters seldom discuss the topic. The phrase “snow belt” is far more commonly spoken, partly because laymen and climatologist alike can readily see and trace the comparative and differential snow depth, from place to place; and from region to region.  Some people in northern states live in snow belts in winter months, and in general; those same zones are rain belts in summer months. Wind patterns drive moisture-laden storms, whether or not those winds bring snow or rain.  Thus, some people live in snow belts and others do not.  Some people live in rain shadows and others live beyond the features of rain shadows.  And some people live in tornado belts, whose attributes are largely ascribed to the cause and effect of wind patterns and continental landmasses like the Rocky Mountains.

While some of the viewpoints expressed above are the personal ones of the Footloose Forester, there are other well-informed observers who share those views.  A friend and fellow tropical forester who lives in Costa Rica, Dr. Loren B. Ford, had this to say:

"Lake Effect" is another short-range weather effect close to the Canada-U.S. border, dumping huge depths of snow on such cities as Buffalo NY and Cleveland OH, and much of the windward sides of Michigan's Upper and Lower Peninsulas.  Chinook (Foehn) winds are another short-distance weather event associated with rain shadows, giving extreme weather events with occasionally mortal implications to wildland firefighters, such as in California's 2006 Esperanza Fire near Cabezón CA; and the San Bernardino National Forest west of Palm Springs.

We lived too far east on the Lower Peninsula to get much lake effect snow, but still plenty, at times.

If people visited Washington State and traveled from Seattle or Olympia to Yakima, they'd believe in a rain shadow. Our weather here in the Central Valley of Costa Rica is affected by rain "shading" just about on a daily basis. Costa Rica is so small, with oceans to the east and west, that rain shadow effects occur if there is higher pressure in the Caribbean than the Pacific; or vice versa (being in the central valley, with Cordillera Volcánica Central to our east and tectonic coastal range to the west.  Also, anybody who has visited both the Dominican Republic and Haiti should easily understand that the dominant easterly trade winds provide much more rainfall to the DR than to Haiti. It doesn't seem that rain shadows should be hard to understand.  But most people don't get much past the morning or evening weather report. 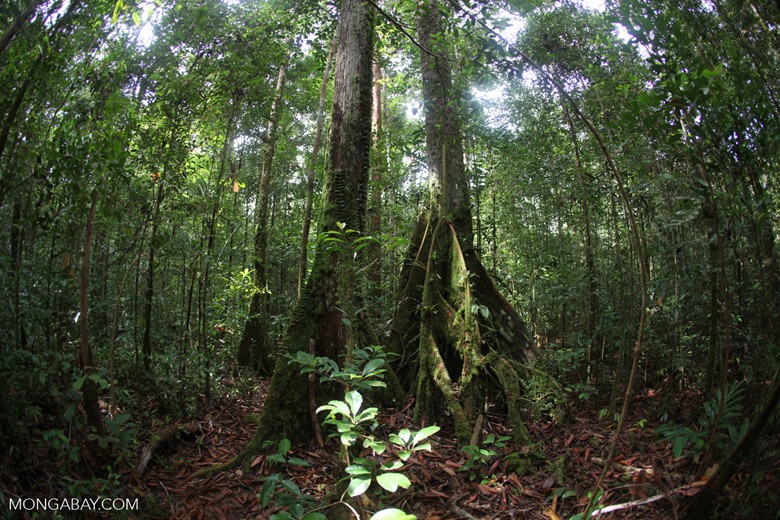 High tropical forest in East Kalimantan...but is it a rain forest?

On an entirely different topic, the issue of what defines a rain forest is nonetheless dependent upon climatic factors; and microclimate factors in particular. Thus, while one might generalize that the western tip of Java has a tropical climate because it is wholly between the Tropics of Capricorn and Cancer, the microclimate effects such as elevation in the terrain, exposure to prevailing winds, and site-specific factors like aspect relative to sunlight all militate toward the conclusive reality that any spot on the ground is not the same as other spots on the ground nearby.  This point is made merely to point out that although the climate may generally be described as tropical in nature, the local environments and ecological factors within landscapes are somewhat dependent on microclimatic features.  To get to the point, a rainy tropical forest should not be classified as a rain forest just because it is in the tropics.  Microclimates and microsites at sea level are not very similar to sites high up on the slopes of active or extinct volcanoes. Hence, one should be hesitant to label a tropical forest as a rain forest without considering a few qualifying factors that distinguish true rain forests, other than there is presumed to be abundant rainfall.

True rain forest has a minimum of 5000 mm of average annual rainfall, according to the classification system of the late Leslie Holdridge; and that pertains only to lowland (basal) altitude belts within the tropical zone of latitudes throughout the world.  Since temperature decreases with rising altitude, the amount of rainfall at higher altitudes also changes at the same latitude.  Thus, snow can be found at the top of Mt. Kilimanjaro, just below the equator in Tanzania; and on top of 13,803 foot Mauna Kea in Hawaii.  And although Hawaii is also within the tropical zone as regards latitude with respect to the Tropics of Capricorn and Cancer, all of Hawaii has been classified as rain forest, according to one vegetation mapping system. There is definitely something wrong with that classification. The Waikiki District of the Island of Oahu, it should be remembered, experiences only 10-20 inches (254-508 mm) of rainfall on an annual basis. That is several times below the range of what Holdridge considered as rainforest.

Unfortunately, many generalists believe that rainforests are typical in tropical latitudes and those tropical climates are more or less the same.  They are not, and they are not.  Almost no true rain forests exist in Africa, and precious few in other countries of the world.  One the one hand, even climate specialists and plant ecologists may be forgiven if they lump moist or wet forests into the rainforest category—if and where the annual rainfall exceeds at least 2500 mm per year.  Arbitrary boundaries are the constructs of those who study climates, plant ecology and their interactions in the ecosystem; but real minimum boundaries do exist in nature.

As a personal note, one reason why the Footloose Forester is somewhat passionate about establishing real boundaries in regard to classification of both climates and plant communities is because Doctor L. R. Holdridge convinced him that plant communities, especially in the tropics, are expressions of the climatic factors to which they are exposed.  Holdridge personally led his ecology students to witness the existence of tropical rain forest sites, tropical wet forests, moist forests, and even tropical dry forests—all within a hundred miles of each other in Costa Rica.  It all has to do with what he professed as Life Zone Ecology.  And he is precisely correct in most regards when it comes to natural stands within the forests of the tropics.

Finally, the Footloose Forester, as perennial student and observer, cannot complete this chronicle without relating an anecdote to make a point.  While on the trail in a magnificent wet forest in Gabon; and listening intently as a Deputy Director of the United Nations Program on the Environment lectured us about world forestry, he made the unconvincing point that he had personally seen both tropical wet rain forests and tropical dry rainforests.  Say what?