The old Fliegerhorst Kaserne of World War II is becoming a modern housing complex.  Based on the construction activity seen on the most recent Google Earth satellite photos, the old military barracks building that the Footloose Forester occupied in 1962-63 is undergoing a major facelift. 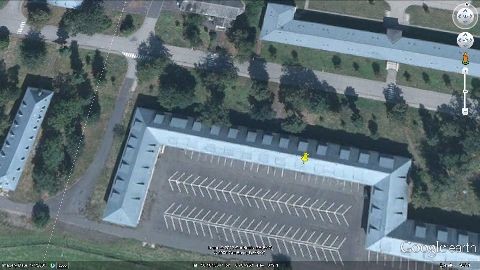 When the Footloose Forester was a young soldier stationed at the field headquarters of the Ist Missile Battalion, 39th Field Artillery some 60 years ago, we actually had very pleasant living conditions.  Ours was an old Luftwaffe base known as Fliegerhorst, or the flyer’s nest.  It was originally designed as a training base for Luftwaffe glider pilots but late in the war it also hosted Ju-86 bombers. The US military took it over in 1945 during the post-war occupation.


Besides being a part of his own Army nostalgic history, Fliegerhorst was the place where President John F. Kennedy shared lunch with about 200 soldiers the day after his famous Ich bin ein Berliner speech in the summer of 1963.  Footloose Forester was honored to be selected to represent his unit at the luncheon that was hosted at Headquarters Mess, 212th Artillery Group.

Google Earth is still the place to look for before-after satellite photos but even Google has to make room in their archives for satellite scenes of modern realities.  Thus the Google Earth screen capture shown below barely resembles what it looked like in the 1960s, but at least documents the accurate latitude and longitude of the place where Footloose Forester shared a memorable lunch with JFK. 
In the 1960s there were more trees shading Fliegerhorst Kaserne and the surrounding area of farmland was much more extensive.  Langendiebach was a picturesque small town, and in his mind it always will be.

Fliegerhorst 2017
The Most Beautiful Tree In The World

Footloose, Even In An Army Uniform