The intention of this chronicle was to document with Google Earth screenshots one or more of the places where the Bengal Tiger and the Footloose Forester once lived.  When they were successfully captured and put into the appropriate Travel or Business/Career portfolios, the intention was then to use them as graphic and reference sources to be inserted into other stories.

Upon reflection, it was apparent that this chronicle would also qualify for the Coincidence portfolio, or the Defining Moments portfolio.  Multiple uses for Google Earth satellite photos are so varied that the Footloose Forester realized that he could kill several birds with one stone, and with one Google Earth screenshot.  Let me explain. 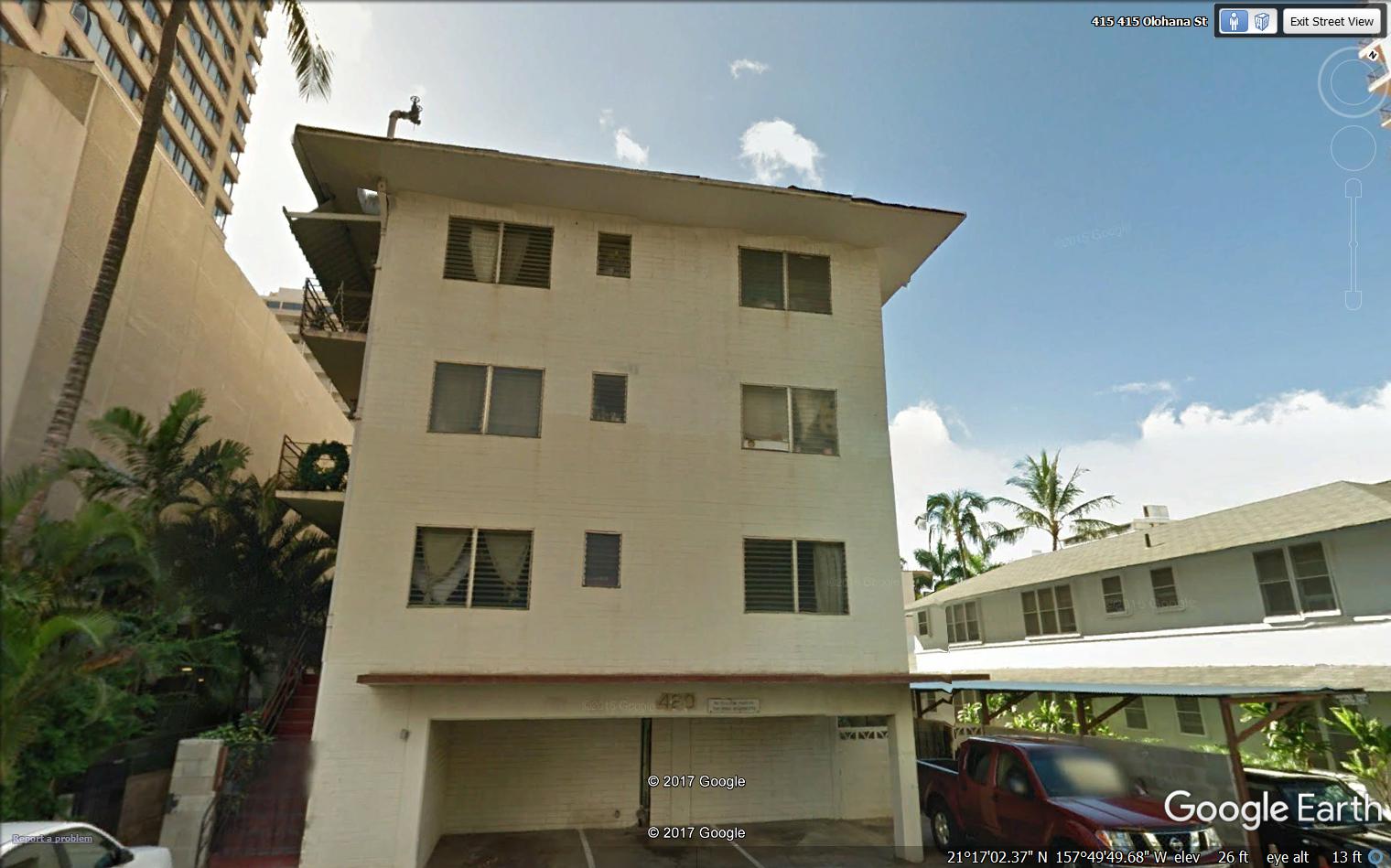 The first task was to take a picture of the student housing where we lived when Footloose Forester was attending the University of Hawaii as an East-West Center grantee.  All of the residents at Pakikona student housing were EWC grantees. They came from Fiji, Thailand, Bangladesh, Malaysia, Tonga, Indonesia, the Philippines, and the USA; just to name the ones we remember.  We can’t remember all of their names, but we can remember 420 Olohana Street because the number is shown on the Street Level view, thanks to Google Earth.

Also, on the same day he decided to capture a Google Earth photo of his erstwhile condo building up the street, as it were, adjacent to the Ala Wai Canal.  We also lived there a few years later.  As coincidence would have it, he learned that just before this chronicle was begun, there had been a fatal fire in an even larger Honolulu condo nearby.  He knew that with the Google Earth 3-D view, and by navigating the screenshot, he could also see the other condo in the same large-scale screen capture scene. It worked.  Henceforth, when he shows someone the scene of his old condo building (named the Canal House), he can pan the scene to show them the Marco Polo, the condo where three people perished in a highrise fire. The Canal House is shown with a yellow stickpin

The movements around Google Earth photos employ archived, still photographs, but when the computer mouse points to other features on an expanded scene, it is the second-best thing to seeing the story in real-time.  The Marco Polo condo is shown in the last photo, below. The Marco Polo and the Canal House

With practice, regular computer users can incorporate Google Earth features into personal stories that have accurate and realistic geospatial significance.  This July 2017 chronicle gets filed into the Defining Moments portfolio.