The 3:10am start on this chronicle was kick-started by last night’s dream that filled in a small piece of an unsolved puzzle.  But the added clarity that dreams sometime provide left open an important piece of that puzzle.  How did the Footloose Forester leave An Khe and return to Qui Nhon during that foggy stretch of wartime memory lapses during the Viet Nam War?  Getting to An Khe is vividly recalled, particularly that episode of an ambush at An Khe Pass.  And a couple of events during that sorry weekend sojourn were easy enough to recall, even after 50 years or so.  But leaving An Khe, probably with a busted assignment as part of the forlorn official visit, makes telling the story a bit less than satisfactory.

The forest provided plenty of cover for an ambush

Attaching An Khe as a war story chronicle on the bulletin board of his mind was not the problem.  An ambush scene, complete with ten burning cargo vehicles at An Khe Pass on the way in, provided an everlasting focus.  But arriving at the end of the workday, and on a Friday to boot, meant that getting the host contacts at Pacific Architects and Engineers to devote enough of their time to accommodate the Footloose Forester was probably going to be a problem.  It was.  Even in the middle of a war zone, civilian contractors kept regular work hours, and that included weekends off.  To compound the problem, the Installation Manager let it be known that the rest of Friday afternoon was going to be devoted to a birthday party (in his honor) and had already begun in another room or building of the worksite.  When added up, that meant zero engagement for the rest of Friday, and zero for both Saturday and Sunday.  Maybe the Footloose Forester was going to get shut out for the entire assignment.  To be fair, he accepted the jeep ride from Qui Nhon early on a Friday morning with the hopes that he could complete his assignment that same day.  On the other hand, the Installation Manager at An Khe did not know that he was coming and there was no radio communication about the ad hoc assignment at the end of the workweek.

All was not lost, he presumed, because the Footloose Forester was often able to engage subordinates with providing logistical support. Not this time.  Everybody at the An Khe installation was fully engaged with the birthday party.  Luckily, the PA&E guy from Qui Nhon, the one with the jeep, offered to drop the Footloose Forester off in town at a very, very modest motel he knew about.  Ha! It turned out to be a brothel.  Maybe he didn’t know that because his destination was probably a liaison with an up-country girlfriend and he didn’t invite the Footloose Forester along.  Some things you didn’t bring up and some things are left up in the air.  But he was a nice guy and he did offer to stop by the following morning and take the Footloose Forester to more appealing accommodations.  And he did just that, on Saturday morning at the agreed time.

The episode at the brothel was something that the Footloose Forester did not talk about with his wife when he returned to Saigon a week or so later.  There was no need to stir up suspicions and there was nothing to hide.  When he got dropped off at the brothel, not really a motel, he noticed about a dozen young girls were sitting on a bare cement floor eating rice.  He didn’t need to be told that it was a brothel.  Thankfully, the Madam accepted his cash for a room, nobody talked to him, and nobody gave him a second glance.  He was bone tired and all he wanted to do was get some sleep.  He does not even remember if he had dinner.  And that is why some dreams are filled with puzzles with missing pieces.

But he does remember wanting to take a bath and the Madam had given him a plastic dipper.  When he saw one of the girls walk past with a dipper in her hand and then remove the covering to a well in the courtyard, he did what she did.  After she drew a bucket of water and took a bath right there next to the well, the Footloose Forester took his turn to send the bucket down to draw water for his own bath.  When in Rome, do as the Romans.  The first bucket of water was used to wet his grimy body and to lather up.  A second bucket was used to rinse off.  The small plastic dipper was used to conserve the water from the larger bucket.  On recounting the scene, he recalls that his room did not have a bathroom and it was either take a bath in the open courtyard next to the well or go to bed grimy.  Fortunately, although the mosquito net was full of holes, the Footloose Forester slept through the night without being pestered by a single mosquito.

The following morning, the guy from Qui Nhon showed up at the time he said he would.  Any recollections about having breakfast or lunch are totally absent, more pieces to the puzzle that are missing.  But being a nice guy who knew that the Footloose Forester was somewhat stranded, he drove him to a US Army M*A*S*H hospital near An Khe. That place almost looked pleasant from the outside, situated as it was amongst some trees that sheltered it from its surroundings.  And the medics who greeted him were cheerful despite their eagerness to welcome him to the site of a Christmas Viet Cong mortar attack a few years previously. In all seriousness, one young medic offered him his choice of beds where he might be comfortable.  He showed him two wards and mentioned that, at the moment, both wards were empty so the Footloose Forester had a choice; but if he didn’t mind the spookiness, he could sleep in one of the beds in the ward where a mortar round had gone through the roof.  That is where the Footloose Forester chose to spend Saturday night, in the bed directly under the entry point of the V.C. mortar round. 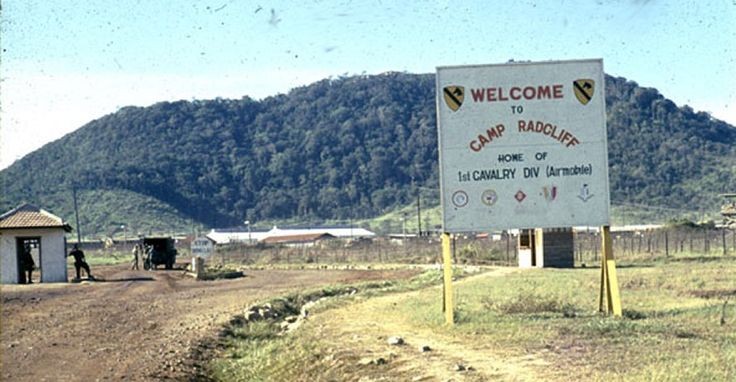 The M*A*S*H hospital was up on a ridge, nestled in the trees

Perhaps the final missing piece to the puzzle that was the ill-fated trip to An Khe, was the unrequited realization that the Forester Footloose does not recall how he got back to Qui Nhon. Sure, the ambush at An Khe Pass, the night alone at the brothel, and another night at a M*A*S*H hospital are hard-wired into his memory but the meals—or lack of them, are all, virtually all, unremembered.  And going back beyond An Khe Pass to the sunshine of Qui Nhon is the widest blank of all.