When a Quora.com question presumably submitted by a grammar school student was posed about how we could determine the texture of a soil, the Footloose Forester decided to answer the question with a little “talk story”, an old Hawaiian custom of explaining things, sometimes scientific things, in storybook fashion.  In talk stories, some of the details may not be accurate, the people or the places may not be real, but the message in a good Hawaiian talk story makes a point that has empirical value.  The talk story went like this:

Domingo wanted to buy some land in the Volcanoes Region of El Salvador, where he planned to grow coffee for the commercial market. So, he looked on an ownership map of the area and noted that Pedro’s land at 2,000 meters above sea level was on the north side of Santa Ana Volcano near its crest and that Juan’s land was also at 2,000m elevation but on the south side of the volcano, also near the crest.  He knew that Juan had a successful coffee Finca, but did not know how Pedro was getting along.  All he knew was that he wanted to buy a piece of land at the cool elevation of 2,000m, right next to the property of either Pedro or Juan.

Domingo bought a piece of property on the north side of Santa Ana Volcano, right next to Pedro but he did not bother to first ask whether the land was good for growing coffee. He ended up struggling to make ends meet, just like Pedro, because the land and its soil was not as rich as the soil found on the south side of the volcano.  Why did both Domingo and Pedro struggle to grow coffee and Juan did not?

It seems that the volcanic ash emitted from the Santa Ana Volcano over the past thousands of years deposited an ever-thickening layer of silt, rich in primary minerals that produced fertile soil. The virtual blanket of silt was deposited only on the south side, carried there by the prevailing winds. On the north side, the emissions from the volcano were mostly stones and gritty gravels that were light enough to be spewed forth, but too heavy to be transported very far in the wind.  In terms of soil texture, the soils on Pedro’s Finca could be classified as gritty gravels.  The soils on Juan’s Finca were described as silt or loamy silt.  Yes, the source materials came out of the same volcano but the working qualities of the soils were quite different.

Getting down to cases, Domingo learned a hard lesson. It pays to know something about what kind of soil he was getting.  Elevation didn’t count and proximity to the volcano didn’t count, but soil texture did count.

OK, how do we tell the difference in soil texture?  At this point, this teller of the Hawaiian talk story slips into a little forensic soil science.  He related to the questioner on how to read a soil textural triangle.  First, you have to establish some parameters so that you know you are within the boundaries of specific descriptors.  Start with a large scoop full of oven-dried soil, taken from the laboratory oven. Next, weigh out a convenient amount that will lead to a representative sample of the soil for which you wish to determine its texture.  A full kilogram of soil (1000 grams) is a typical sample size that usually gives a range of soil particles.  Next comes passing the kilo of soil through a stacked nest of sieves. If only 10% of Pedro’s soil sample passes through the topmost sieve in a nested set of sieves and the rest stays in the uppermost sieve, his soil should be described as gravel or larger, not technically soil.  Gravelly soils are hard to cultivate and not very productive.

Juan’s soil had 10% sand by volume remaining in the uppermost sieve and 90% passing through to the smaller sizes, with some remaining in the finest sieves. That indicated that it was in the silt range but there was probably some clay present.  The soil that passed through all the sieves gets the temporary designation of silt + clay.  It turned out the only 5% was determined to be clay (by using another technique) thus Juan’s soil should be called silt.  If there was 15% clay in the sample, the soil type should be called silt loam. 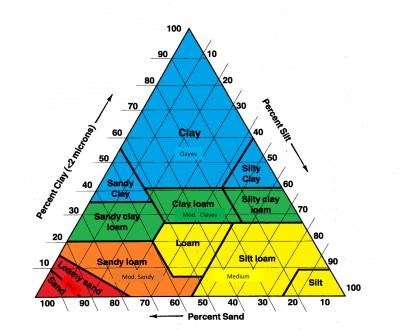 The working qualities of soil have applications that extend beyond its considerations for strictly agricultural purposes but the agricultural uses of soils have world-wide implications.  Gravels are difficult to cultivate and although the minerals might be the same as in the associated silts, chemical reactions are more limited because of the smaller total surface area that exposes the minerals to wetting and uptake by plants.  By contrast, the greater total surface area of the exposed soil in Juan’s silt meant that it took up water more easily and had greater chemical exchange activity.

One serendipitous discovery about Juan’s silt was the fact that you could also use it to put out wildfires that are common in the Volcanoes Region, by just digging down in the soil profile and scooping out the fluffy, powdery soil and shoveling it at the base of active flames. It was very effective at snuffing out the flames on light fuels when there was no water to be had, high on the mountainside. Deep blankets of silt found on Juan’s land were many meters thick, an almost limitless supply.

By now, the Footloose Forester hopes that part of the firefighting strategy in the Volcanos Region of El Salvador now depends on using silt to smother the flames and not to depend on getting water from the lowlands.  He remembers digging silt out of the soil there with his hands and snuffing out an active fire that had a 100m front. It should work for others. The talk story of Domingo, Pedro, and Juan was made up, but the silt banks on the slopes of Santa Ana Volcano are real.  And the wildfires in agave scrub are all too common.