Many chronicles of late have begun with ideas developed in dreams and later polished on paper. A few chronicles like this one begin with a picture and must be probed to reveal the story contained in the picture before it becomes a story that most people will understand. The process is a challenging one, if ever the finished product is going to be interesting enough to gain someone’s attention. At the core of the challenge is the urge to communicate with others a little bit of knowledge, a little bit of nostalgia, and a little bit of insight.  If the purposes of communication are:  To Inform... To Instruct... To Entertain, then even inconsequential chronicles like this one presumably have value.

Good communication has always been prized by the Footloose Forester because he sees numerous benefits when it is skillfully applied.  The first example that comes to mind was the blossoming of understanding that emerged each and every time his University of Hawaii professor of biochemistry commenced to chalk in the shorthand symbols of amino acids and chemical bonds on the first of two blank backboards, then proceeded to describe—step by step, the development of the protein of the day.  Both words and pictures were slowly and deliberately applied in the telling of a tale, the tale of how andesine or tryptophan is structured in living cells.  He was a master storyteller who was a genius at meeting the goals of communication: To Inform... To Instruct... To Entertain. Biochemistry is complicated but he definitely made it entertaining.  In the process, he told a story using words and pictures, and he used both blackboards to do it. 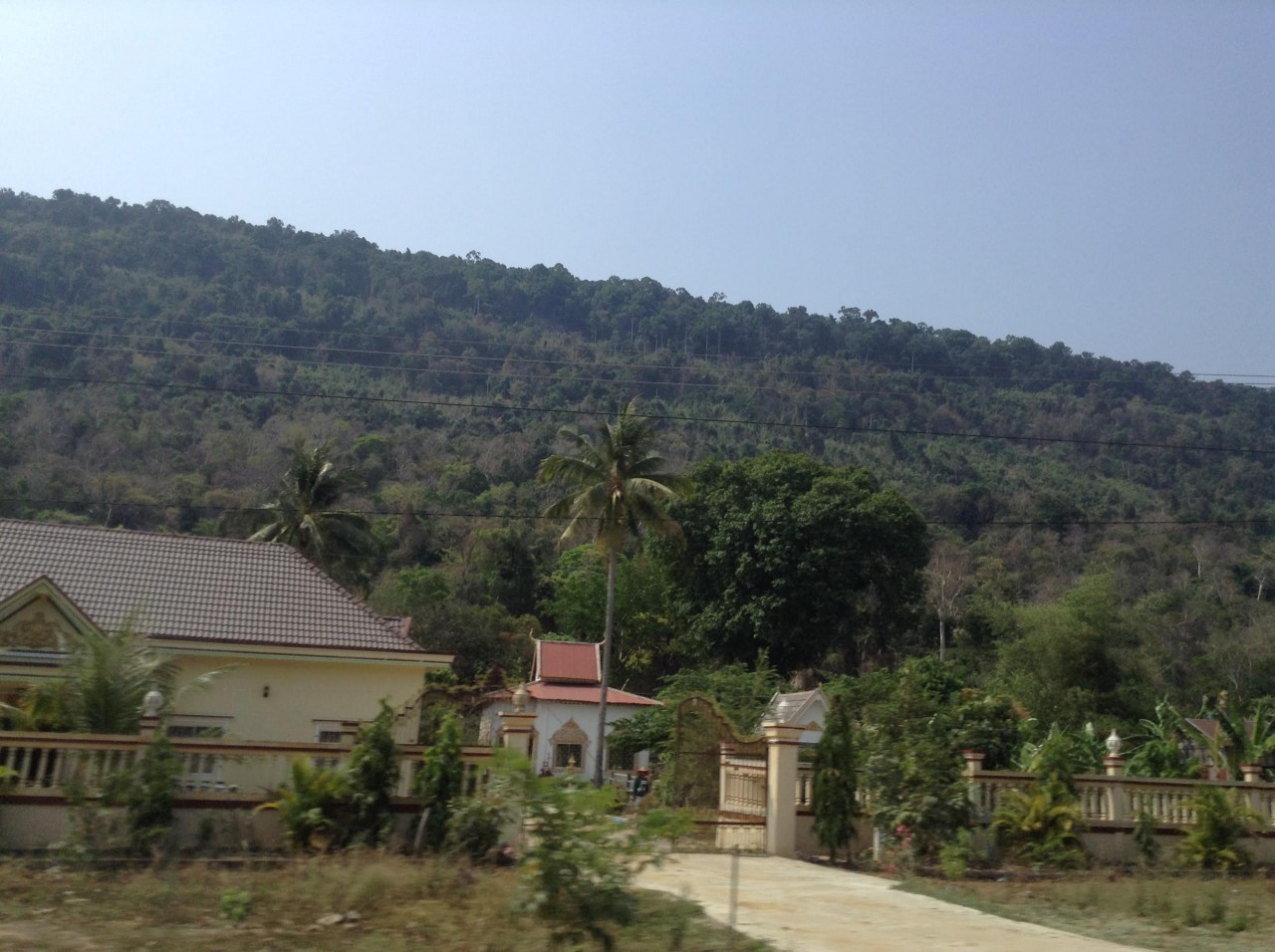 A Countryside Scene…But About What?

To Inform:  This is a country scene taken during the dry season in Cambodia.

Why was this snapshot taken?  To show the contrast that in a region where the vast majority of people are poor, the owners of this freshly whitewashed and spacious home are quite well-off.  They even have their own Buddhist temple on the property and a well-constructed security fence and gated access.  Notice the electric lines passing in front and overhead.  Not all areas of rural Cambodia are electrified but good progress in the campaign of electrification is being made.

Other features in the photo include more than one coconut tree, all of which are planted.  Coconuts provide food and drink year-round, as long as the coconuts last.  There are also a few banana plants in the photo, a typical complement to a subsistence garden.  One suspects that up close, an observant visitor would discover a host of other fruits and vegetables that are tended by and consumed by the residents in the house.

To Instruct:   The broad expanse of greenery throughout the photo is a static piece of evidence that even in the dry season, most trees and plants remain green and retain their leaves.  If you look closely, there are at least two trees that have shed their leaves and are probably representatives of a few species that lose their leaves in the dry season.  In other words, even in the tropics, some species are deciduous.

Another feature of the photo requires a perception that involves a transition of land use from permanent agricultural pursuit on the level land adjacent to the house, through intermittent use of marginal agricultural land on the lower slopes in the background, to the occasional and infrequent utilization of residual forest at the top of the hill.  Although there is not much left of the original forest that may have occurred here in the past, the few obviously large trees that remain are specimens of what the original high forest may have been like in terms of tree height and density.  The concept of transition from one distinctive vegetative community to another also requires the perception that features like plant height and density from settled areas to non-agricultural forested areas are impacted by various levels of exploitation of the land and the plants, themselves.

To Entertain:   Cambodia is a colorful land that is rich in history and surprising in the number of diverse landscapes that evolve with the times and change with the seasons. To take in the variety of landscapes and how they blend into a mosaic in the modern world would require visiting various parts of the country: city, suburbs, and countryside.  Discovering the transitions of lifestyles, architecture, and land-use patterns are both entertaining and educational.  Having a few pertinent photos, or a thematic suite of photos to help remember a few details will make the job of communicating via chronicles more meaningful.  The entertainment value of photos includes this one.  Can you spot the solitary person in the picture?  Can you describe what he/she is wearing?  A careful inspection might even be a stimulus to discuss the contents of the chronicle and the baby in the bathwater—the photo evidence of a story or two that should be shared.

All I Need To Know About Life