Let’s Go Shake the Mango Tree, the Cherry Tree, and the Apple Trees

Many chronicles of late have been enticed and extracted from dreams and polished up on paper before deciding where the latest one belongs:  in the legacy story category?  the education category?  or in the military category?  This one belongs in the achievement category.  The Footloose Forester is pleased to say that the achievement belongs to The Bengal Tiger.  Let’s back up to the impetus and the setting for the impending chronicle.

The impetus for a fresh chronicle was inspired by a Quora.com question posed by one of its members who wanted to know:

How old were you when you last climbed a tree?

The Footloose Forester searched past chronicle entries to come up with an age of 78 when he last climbed a tree.  It was a grafted apple tree that his wife knows well. He climbed it as an act of symbolism because the Norway Maple that he wanted to climb (the same one he often climbed as a growing boy in Netcong, New Jersey) was now partly dismembered and it is now one of only two trees left on the property where he had lived.

The questioner on Quora may have wanted to know about the attitudes of adults.  But it took a dream-induced quasi-analysis to realize that his wife Thu, otherwise known as The Bengal Tiger and her tree-climbing antics should have been featured in the answer.  Thanks to scraps of information in other chronicles, it becomes clear that her age was secondary when she first urged, “let’s go shake the mango tree” in 1974 when she was about 30 years old and living in Hawaii.  Surely, she said “let’s go shake the cherry tree” before climbing into the delicate branches of her fruitful Rainier Cherry tree in Pennsylvania, more than 10 years later.  And, thanks to a more specific reference in another chronicle, we now know that The Bengal Tiger climbed her apple trees in Pennsylvania every year at harvest time. Of course, she pronounced quite symbolically, “let’s go shake the apple tree.”   The last time was in 2018 and The Bengal Tiger was 74 years of age.

Scraps of the chronology can be gleaned from the excerpts copied from older chronicles that are still available.

[1971]   As we lay in bed on Sundays mornings contemplating how we would spend the day together, Footloose Forester was inwardly overjoyed whenever Thu suggested, "Let's go shake the mango tree." To him, it meant many, many things; both at the time and in the decades of honeymoon that were to follow. Shaking the mango tree meant climbing the tree and inducing the ripe mangos to fall to the ground. It meant that his athletic wife was going to scamper up into the wide, accommodating branches of that Itamaraca tree. His bride, ever young in spirit and in mind was telling him that she enjoyed, again and again, the simple pleasures of time together in pursuit of things that bound us close; the thoughts of how we were as close as we could come to communing with nature; and a statement that we both enjoyed the bounty of nature and could enjoy the perfumed milieu of all manner of flowering trees around us.

[1998]   It would not be the first time that Thu raised a fruit tree from seed.  The first near-miracle involved an episode with the Rainier cherry that she nurtured in the backyard of our home in Pennsylvania.  The yellowish-red cherry of the Rainier variety does not grow naturally in Pennsylvania.  Nobody told Thu, so she took a few cherry pits from the sack purchased in a local grocery store and dried them on the window sill.  Later on, she put them in the very same hole where another fruit tree (peach) had grown and died off a decade earlier.

The example of growing a tree from a seed was vintage Thu.  A more detailed account might go something like this: One summer day a decade ago, Thu bought a sack of cherries from the local supermarket and saved a few seeds for an experiment.  Fast forward to a few years later…. we started harvesting from that tree that we had watched grow into maturity. The yellowish-red cherries were indeed of the Rainier strain, and we harvested hundreds of them.  It was a prime example of something new in the region.  The tree produced cherries for three more years until it succumbed to disease.

[2015]   The Bengal Tiger was already in the branches of the Pennsylvania apple tree in the autumn of 2015 when she connected with the expression she had used some 44 years earlier.  As she was about to shake the branches of the ripened red apples; and of the green apples on another branch, she smiled and said: “let’s go shake the apple tree.”  Back in 1971 it was a mango tree she had in mind, and we were enjoying the harvest of Itamaraca mangoes on the campus of the University of Hawaii. 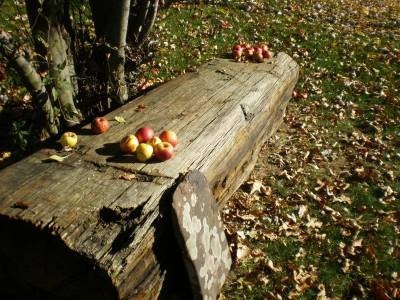 The Bengal Tiger last climbed this little tree in 2017. Apples from the tree sit on 120-year-old American Chestnut log

On Sunday mornings after church in Honolulu, the Bengal Tiger would mull over our weekend agenda, and during early spring it often came down to “let’s go and shake the mango tree.”  She was always the first one to climb into the low, wide branches of the Itamaraca mango tree and give it the first shakes.  As ripe, pungent mangoes fell softly to the ground, her dutiful companion would gather them up.  So it was not so strange that 44 years later The Bengal Tiger was up in the branches of the apple tree and her soulmate was again on the ground collecting them.  An hour later we also went to shake the nearby plum tree.

These days we don’t always make it back to Pennsylvania during apple harvest season, but there is little doubt that if she spies some of the luscious beauties of the younger grafted tree beckoning her, my 76-year-old Bengal Tiger will be up in that tree, just as she was a few years ago.

UPDATE:  Just eleven days after this chronicle was posted, the Bengal Tiger slipped away from this life.  Her adventures will live on in.  She is sitting perched on a branch of her favorite Itamaraca mango tree in heaven.

What Do You See?
Leaving An Khe