Nobody would believe it if you told them that a rag-tag crew of a mere handful of Peace Corps Volunteers would whip the Pakistanis in both basketball and volley ball on their home court and with a huge home field advantage for the Pakistanis. Why not?  After all, Americans are pretty competitive in sports and Peace Corps types were always ready to accept a challenge.  But the proper question should be, why did not the Pakistanis win, given that they had two or three extra players on the volleyball court, and had dozens of willing substitutes for their basketball team; when the Americans had only two substitutes?  You had to see it with your own eyes to believe that it really happened.

The regional venue of the impromptu and tongue-in-cheek Asian-American Games took place in Bahawalpur, West Pakistan where the Footloose Forester was teaching forest surveying as part of his Peace Corps assignment. He was requested to arrange some sports competitions between the 130-140 Pakistani forester + forest guard students, and the local Peace Corps volunteers.  We had only a handful, at most, scattered throughout the vicinity and not all of them could make it to the competitions.  But we managed to put a team together, first on the basketball court, then later a team of volley ball players on their volley ball court. 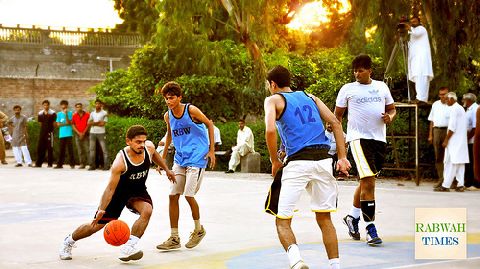 The Pakistanis had about 130-140 players to choose from

The basketball completion was by far the most unbelievable.  The Paks had their choice of any players from among the students. So, that meant that they could choose from among more than a hundred students.  We Peace Corps competitors had to play everyone we had because there were only seven of us available. That also meant that we were not going to have many substitutions for injury or rest.  Not to be deterred, we unabashedly took to the open-air court with Don Barbaree, a red headed, freckle-faced cracker from Florida; Vern Kohoya, a squat yellow-skinned Japanese-American from California; Frank Sileznick, a swarthy-featured engineer of Eastern European stock who hailed from New Jersey; Jimmy Clark, a short, dark-skinned black from Mississippi; and the Footloose Forester, another short guy with stocky Hungarian ancestors. Two other PC volunteers from the Pak X group (whose last names he can't remember) also showed up.

Among the guys he remembers well, even Vern Kohoya was taller than the Footloose Forester, who was the shortest of them all.  That is not to say that we made up for our unlikely size disadvantage with basketball skills.  On the contrary, although we all knew how to play the game; Jimmy, Vern and the Footloose Forester were not at all skilled, or even interested in basketball. We played because we were Peace Corps volunteers who were invited to compete.

During the game, and as we somehow built a commanding lead, one or two of the Pakistani students who stood along the sidelines would come up to the Footloose Forester during an out-of-bounds pause and ask him if that red-headed Don Barbaree was an American. Yes, was the answer.  A bit later, another student spoke up from the sidelines and asked the Footloose Forester if Japanese-American Vern Kohoya was also an American. They wanted to get the facts from somebody who knew. And as their resident teacher in Bahawalpur, the Footloose Forester was happy to inform them. Finally, a teacher and colleague of Footloose Forester saw an opportunity during another short pause to ask a final question. Was black- skinned Jimmy Clark an American, too?  Yes, was the answer.  We were all Americans and all Peace Corps Volunteers.  Then he said, “I believe you for the first time.”