Tales of the Bengal Tiger reach back to the time when she was growing up in Cambodia and Viet Nam and continued to be written until a few days before her death in May 2020.  All of the tales were composed by her soulmate and husband who took great pride in recording many of the colorful exploits of the fearless lady who was unafraid to take on four punks and would-be thieves on a dark night in Madagascar, or to bare-handedly reach into a small underwater cave in Haiti to wrestle an unwilling langouste meant for dinner.  That lovely lady was also a practical homemaker who dried apple strips from trees that she herself planted and then, at harvest time, climbed into those trees to shake them until her bounteous harvest began to fall to the ground.  The last time she performed her harvest ritual by climbing the apple trees was when she was 74 years old.  You just can’t make this stuff up.

A big part of the impetus to record her stories was helped along by having documented evidence of some of her comings and goings.  Her expired passports show some of the places and dates clearly enough to spin a tale of a peripatetic who got the most out of her life.  One of the most fascinating and unbelievable stories is how she happened to qualify for a US passport and become an American citizen without having lived in the United States.  She became a US citizen on May 1, 1969, and was issued a US passport a few days later, in Agaña, Guam. Her husband knew that it was possible to take the US citizenship exam in The Territory of Guam, and that is what she did.

When we were married the previous year, the Bengal Tiger had to apply for a Vietnamese passport.  Getting the passport itself was not so much of a hassle but getting an exit permit from Viet Nam to Guam took 52 signatures, as duly noted and recorded by an apprehensive spouse who knew a thing or two about bureaucratic red tape.  For whatever reason, when we took our delayed honeymoon in Hong Kong the previous year, she also traveled on the same Vietnamese passport but getting out to Hong Kong was routine enough for Vietnamese citizens, presumably why the authorities apparently did not make that much of a fuss.  But we were checked out by immigration authorities who wanted to know if Mr. Richard Pellek was really married to Nguyen Thi Hue Thu.  We seemed to do most things the hard way. 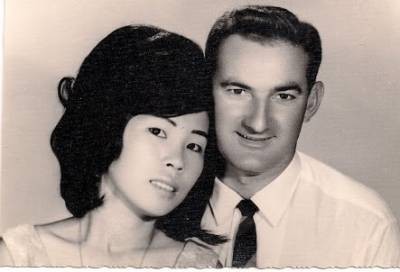 The year 1968 must have been a busy travel time.  After the Têt Offensive at the end of January, we were On the road…again!!! to Hong Kong to continue the delayed honeymoon and then on to the USA to meet her new in-laws for the first time. That remarkable lady was able to identify almost every person in attendance when she was later shown a photo of the family gathering in Netcong, New Jersey.  We chose to return to Viet Nam by way of Japan, where the Bengal Tiger had an agenda to purchase a knitting machine for her sister.  A determined young bride did not always let on what she was doing, but she was practical to the core.

Upon returning to Viet Nam, we began the bureaucratic red tape to obtain her citizenship.  The first part was easy, merely filling out the paperwork and sending it off.  Our gamble was applying to the Territory of Guam and its consular office there.  The immigration laws allowed a few exceptions to obtain citizenship, and we banked on being recognized as being included in one of those exceptions.  Besides, Guam was a thousand miles closer than Hawaii, the second choice as a venue for taking the citizenship exam.

Nguyen Thi Hue Thu studied diligently early every morning in order to be prepared to take the citizenship exam, just in case we got cleared to travel to Guam.  It was only about 10 days before the citizenship exam was scheduled to be held on May 1st did we get a telegram from Guam notifying us that she had been accepted to take the exam.  What happened during the next week was so unbelievable, that to this day the Footloose Forester can hardly believe that we actually pulled it off.  An upcoming version of the story is too detailed to relate here, but most of it has already been put into print in one of his blogs.  Suffice it to say, Nguyen Thi Hue Thu flew to Guam on a Vietnamese passport and returned a couple of weeks later as Thu Pellek on an American passport.

Hard Wiring of the Brain
COVID-19 and Older Adults: What All You Should Kno...