Storytellers and family historians who aspire to share legacy stories of those they love sometimes find themselves searching for material that people will remember warmly and treasure deeply.  Indeed, the popular website LegacyStories.org is dedicated to hosting the authors of legacy stories and invites them to post their personal memories with family photos, videos, anecdotes, amusing tales, and other memories that constitute legacy.

There are war stories, fish stories, tall tales, wives tales, and tales from the Vienna Woods.  The stories don’t all have to be about people because if they could talk, many a dog, cat, mongoose or gecko could tell us stories of adventure and drama that would hold us spellbound.  Even rocks and trees have stories to tell. Indeed, geologists know this and they are the ones who share the legacies of rocks with the rest of the world.  Trees have just as many legacy stories as anything else in nature.  Many trees are downright famous.

Ancient trees share their legacy stories through their fossilized records and, for some, even their contemporaneous histories.  A few species around the world have specimens that are thousands of years old.  There are the giant sequoias, bristlecone pines, Eucalyptus, Kauris and a few other tree species that boast some specimens that are still living, even after 3000 years.  One species, however; has already recorded hundreds of legacy stories to which thousands of people were witness--and part of the telling. The multiple legacies of the maidenhair tree, the Ginkgo biloba , are part of Chinese cultural lore.  So revered is the Ginkgo in China that over 200 poems have the Ginkgo as the subject.  A famous one of only four lines was written more than a thousand years ago during the Tang Dynasty by the celebrated poet and philosopher Wei Wang (701-761).

Thanks to Jimmy Shen, a Chinese botanical photographer currently living in Hangzhon, China, and thanks to the many social media sharing sites, many of us can read some of the legacy stories about people who long ago were part of the history of the Ginkgo.  This chronicle also offers a broad view of the grand legacy of the species itself, as told by many of the trees, themselves.

So revered is the Gingko in China that stories about ginkgos go back for over two thousand years.  And since some of those very trees are still alive, it is possible to visit them today and learn first hand how some of them were saved, how they served the communities in which they are located, and why they continue to be revered as part of local cultural history.

Jimmy Shen has written a magnificent book about the genus Ginkgo (Ginkgo, Melody of Nature. Jimmy Shen, 2015. Ginkgo Press, Beijing: 110pp) that is filled with virtually every aspect of ginkgo lore. There are historical data about individual trees, their botanical characteristics, their height, diameter, their present location, medicinal uses (more than a dozen folk remedies), role in community aesthetics, and some aspects of community efforts to propagate and nurture them.  There are also descriptions about some of the physical scars that bear witness to the past.

Of the many legacy stories about Ginkgo that stand out, many examples come from the Tiannu Mountains of Zhejiang Province in Eastern China.

The plethora of legacy stories derives from the the wide dispersion of Ginkgo as a species, their distinctiveness as forest trees that sometimes attain remarkable girth, tallness, and longevity.  And of course, their longevity as individual sentinels in the forest sometimes mark them as unique in history.  More than a thousand trees greater than 1000 years old are still standing, and several hundred of those are over 3000 years old.  Four extant ginkgos greater than 3000 years old have been identified and their vital statistics have been documented.  Data on their height, diameter at breast height (dbh), and crown area have been recorded for verification purposes. Some reliable sources say, however, that the oldest ginkgos are around 1,200 years old. With the aid of modern GPS technology, it would be feasible to develop a travel itinerary to visit some of them.  Such a venture would add greatly to the lore of ecotourism.

The 1500-year-old tree shown in one photo of Shen’s book is 158 feet tall and has a dbh of 15 feet.  It can be seen growing near Yangjia Village in the forested region of  Zhejiang Province where a few others older than 2000 years are still growing.  A typical young and healthy Ginkgo is shown in the photo below. 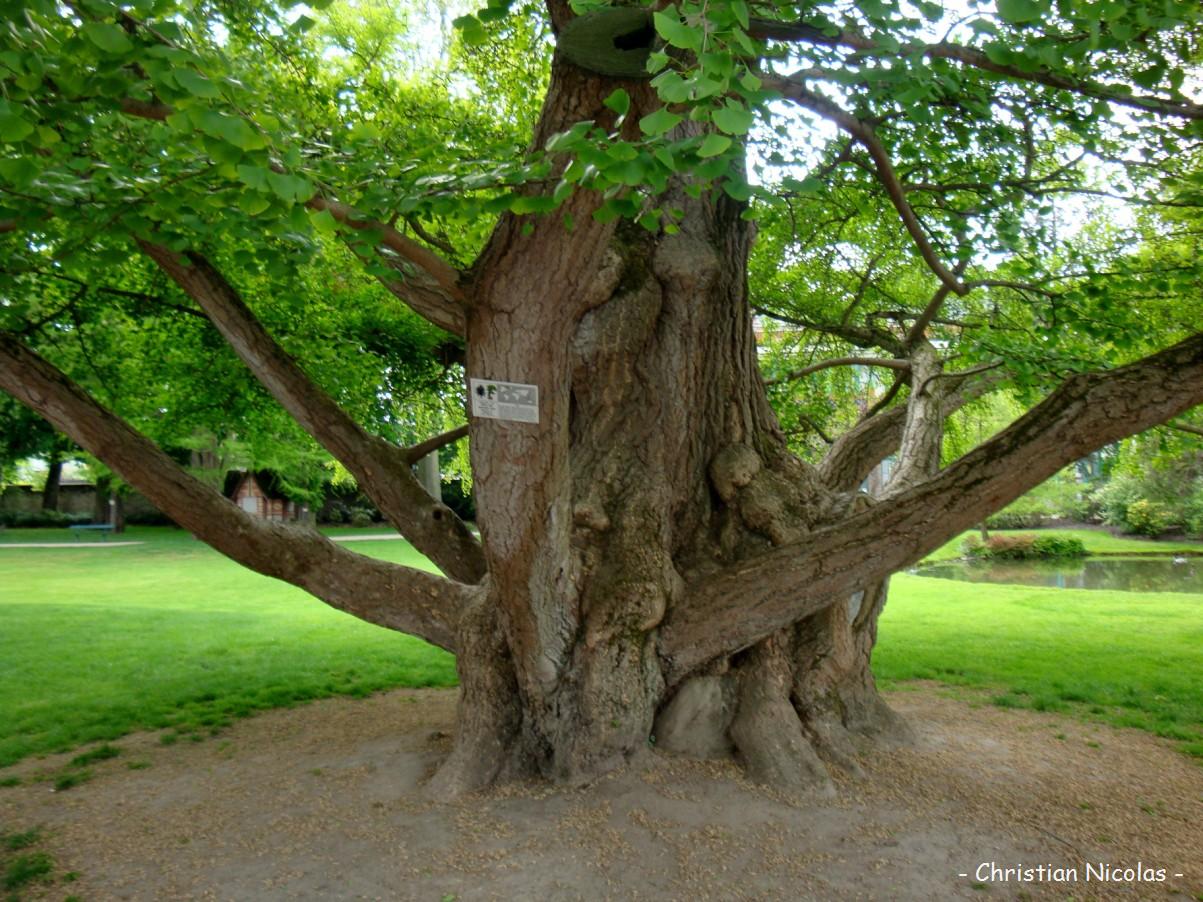 An older, but not yet ancient Ginkgo tree on display in a botanical garden

There are other countries where ginkgos grow and share their own legacy stories.  Among the world’s oldest species that date back about 200 million years, according to fossil records, it was a dominant species in North America forests about 150 million years ago but did not survive an epoch of global cooling about 7 million years ago.  A few of the oldest standing ginkgos outside of China were re-introduced in the late 1700s into Europe, and later into the United States. Two notable trees in Philadelphia date from 1785 where they were re-introduced as planted exotics. Outstanding examples of old and large ginkgos can also be found in Korea, Japan and in some European countries where they were planted from seed more than a hundred years ago.

Among the tallest trees in Chinese forests, the one found at Zhan is nearly 230 feet (70m) tall. And the diameter of some specimens rival the redwoods in California.   Many trees between 10-20 feet in diameter are known and have been properly cataloged.

For the most part, legacy stories recount events written by and for humans who desire to share the past with others. Inasmuch as Ginkgo trees are part of the long cultural history of China, they are the still living part of the legacy of others who have passed on.  They played a role in the lives of others, and they have their own tales to tell as actors in historical events. As perhaps no other tree species in history, Gingko has been studied, archived, referenced, promoted, utilized, described, and revered.

One tale of historical significance is about the inception of the Ming Dynasty and how a ginkgo tree played a role.  At Baigno Village, Zhejiang Province, there is an imposing 1,400-year-old ginkgo that stands at 98 feet tall and has a diameter of 9.8 feet at breast height.  About 660 years ago, after losing a battle against his enemies, Yuanzhang Zhu retreated with his men but with the enemy forces close behind.  One day when he was passing a large ginkgo tree he dismounted, climbed the tree and hid himself.  He told his soldiers to take his horse and continue on.  The dense foliage of the ginkgo hid him well and his enemies passed by.  He escaped to fight another day.  Later in the nearby Daming Mountains, he reorganized his troops and eventually won the war.  Thereafter, Yuanzhang Zhu founded the Ming Dynasty.

To this day, there are many wooden storyboards adorning the trunk and branches of the historic ginkgo tree that is part of Chinese history.  The boards display the names and messages of many visitors who came seeking future happiness.

Although there are notable specimens of planted Ginkgo found in botanical gardens and elsewhere around the world, the oldest and the richest of the tales about Ginkgo emanate from China where they predominate in scattered forests throughout the country.  And if you want to know everything there is to know about ginkgos, there is no better source than Jimmy Shen’s 2015 book--Gingko, Melody of Nature.