If I Had My Druthers

If He Could Do It Over Again

The trappings of the modern world are so much a part of our daily lives that we seldom contemplate what it must be like in places where there are no conveniences.  With instant communications facilitated by satellite television, we can transport ourselves to any place in the world, and do so more often than we realize.  Perhaps what we don’t know is what is happening as we surf the channels with the remote button, is that most modern contrivances have been imported into the scenes of the video films streaming out of Mongolia, or the Amazon tropical forest, or the frozen barrens of Antarctica.  That is not to say that all places in the world are modern enough to have the infrastructure to support modern communications networks.  The global network of satellite systems has taken care of that problem.  An explorer, an adventurer, or a reporter merely has to have access to the interface linkages to make video, film, and live TV dance before our eyes at the flick of a switch.

If the Footloose Forester could have his druthers, he would do some things over again.  One of them would be to carry a high capacity digital camera and record the realities of boat building around the world.  With about 80% of the surface of the earth covered in water, virtually all the nations of the world have had boats as part of their cultural heritage.  What is truly amazing, however; is the breadth of variation in the design and construction of boats found in various countries.  Going back thousands of years, people have been building boats for use in their everyday lives, for community and commercial fishing, and for the conquest of other nations. But there is a remarkable uniqueness in the host of features that distinguishes boats from one cultural group to another.

An expert could expound at length about the choices in building materials, the median sizes, shapes and ornamental detailing within generic groups of ships.  But unless we are students in the history of boat building, most of us can only grasp a fraction of what we see when we stare at a ship or even at one lonely little boat.

If he had his druthers, the Footloose Forester would always have a digital camera or iPad on hand, to record the object of his affections before he attempts to explain to others what those exotic boats looked like.  He regrets not having a close-up of the funeral barge on display in the Egyptian museum right next to the Pyramid of Cheops near Cairo.  But if he had his druthers, he would also photograph the dugout canoes he remembers at various places, starting with the heavy, crude dugout pine log that a few teenagers made at Wrights Lake in California.  It was short, tight, and clumsy but it was a dugout and it floated. 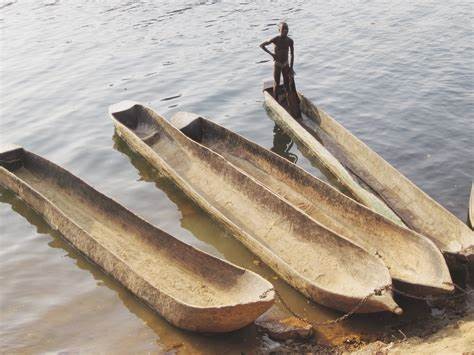 Another short and heavy dugout was the one owned by Ahi, a local villager who helped the Footloose Forester in the mainland forest in Ujung Kulon, Indonesia.  We made the mistake of beaching his dugout at high tide and were unable to push it back into the water at low tide, so we had to wait hours until the tide rose again.  And then, there was the dugout we used to go upstream in the Rio Caparo in Venezuela.  As a hand-made craft, that one was also heavy, and we sometimes had to get out to push it in places where the water was too shallow to use a motor.  Finally, there were the long, sleek dugouts that lined the beach of the Western Caribbean at Orange Walk, Belize. There were at least a dozen of them, side by side; and that was only one beach. If ever someone wanted to marvel at the workmanship of a dugout canoe, constructed from a log of a single tree, Belize would be a good place to start.

If he had his druthers, the Footloose Forester would also unring the bell of discord among peoples of different faiths.  He would unwrite the Holy Books, all of them; and start afresh with themes of harmony.  He would put aside enmity and strife.  In his ideal world, he would not deny that religious texts of the ancients contained man-inspired themes of love and compassion; but also words of scorn and contempt; words inciting violence toward enemies. If he had his druthers, love would drive out hate.

Guns Take Their Toll
Why Meeza Is Sooooo Cheep

Epitaph Of A Wanderer