M is for Mali

Going to Timbuktu was perhaps the first reference that the Footloose Forester ever heard about an African city, when he was still in knee pants. That is because his mother kept repeating the name Timbuktu. As it happens, he never did get to Timbuktu as an adult, but he did see it on a map when he was in perhaps the fifth grade. In any case, thoughts of the expansive Sahara Desert and world geography would later become a lifelong obsession. No Timbuktu, but many nostalgic memories about Mali and the days of a working Footloose Forester just downstream on the Senegal and Baffing rivers. 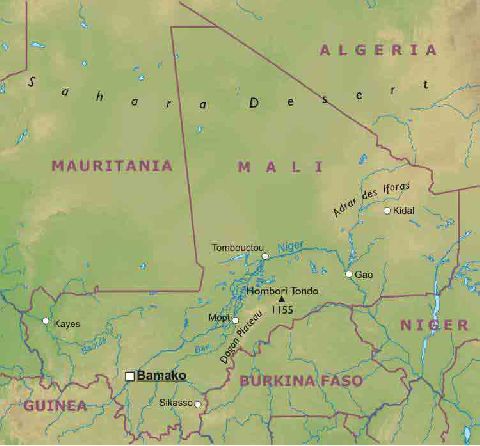 Mali map:  Tombouctou (Timbuktu) is on the Niger River

Going into Mali for the first time was by four wheel drive Land Rovers across the Baffing River upstream of Matam, Senegal. When his crew of environmental specialists working on an Environmental Impact Statement reached the banks of the green-tinted river on the western border of the country, they were informed that we were the first group that year attempting to cross at that point. There was no road and no bridge for autos. Since it was late spring, the water level was still sufficiently high that merely putting the Land Rover into four-wheel range was not a guarantee that we could make it across.  Many a vehicle had been swept downstream when the current was superior to the pulling power of a Land Rover.  Later in the year when the water level dropped, fording the Baffing with the engine running was common enough, but not this day of high water.

The other option was to try to drive up the 60 foot bank of the nearby railroad trestle and hope that we didn’t get high-centered in one of the gaps between the railroad ties.  Or meet a train that was coming.  We opted to try crossing with the engine shut off and pushing and pulling the two Land Rovers at one of the shallower crossings.  To do even that, we engaged the services of at least 20 villagers. It was great fun and exhausting work.  The paymaster had to make sure he had enough cash on hand to forestall any disputes.  Once on the other side, we all had memories that would last a lifetime.

Once inside Mali, we proceeded to the customs station.  Maybe we should not have bothered. If there was anybody with authority at the customs station, the Footloose Forester doesn’t remember seeing any, but he does remember never getting out of the vehicle and never producing a passport or visa. So it was the second time in his life that coming into and later leaving a country was probably illegal. Upon departure a couple of weeks later, the Footloose Forester remembers approaching the same customs shed in the Land Rover, but this time from a different direction.  There must have been someone in authority on the premises at that time because two uniformed guards came outside to the gate and simply told us that we could not enter Mali; and that we should turn around and go back from where we came—across the Baffing River. That is what we did, never having to explain how we happened to be in Mali illegally for the past two weeks.

While in Mali, however, camping above the steep banks of a future dam construction site known then as Manantali was a golden memory.  These days the future impoundment now known as Lac de Selingue can be found on satellite photos at Lat. 11º 38' 14.81" N and Long. 8º13' 51.19" W.  Sleeping in the circular mud huts with grass thatch roofs was preferable to sleeping in our tents because the tents were hot in the daytime and colder at night.  By contrast, the mud huts were cooler in daytime and warmer at night. Of course, we had to have tents on this extended safari because we never knew just where we would be at the end of each travel day.

Other memories that made this chronicle entry so special was having fresh wart hog for dinner, provided by a willing local hunter who approached us in camp and offered his services.  He even had his own muzzle loader rifle, or should it be described as a musket? Unbelievable!  A muzzle loader?  He wanted to shoot pesky wart hogs that raided his crops, and since the locals didn’t eat pork because of religious taboos, it was a win-win situation all around.  We later enjoyed barbequed wart hog in the cool evening hours within sight of the baboon cliffs above us and the sounds of hippos in the river below.

Down In The Valley
If I Could Change Ethnicity

A Half-Bar Of Soap

The Desperation of River Blindness