The Survey Revealed A Misplaced Spring

A Memorable Survey in the Sierra Nevadas

When he worked for Cal-Pacific Forest Consultants in the early 1960s, the Footloose Forester held a position that might be described as a Junior Forester, a graduate forester, or just a forester. Most of the crew members were hard-working guys out of high school, out of work, or just out of military service. Since he was recently out of college, he was already considered middle management. In our small company, such people were asked to do a variety of jobs and quietly given responsibility in proportion to the level of confidence that the two owners of Cal-Pacific had in them.  This tale is about one episode in which the Footloose Forester displeased one of the owners.  At Cal-Pacific, it was not the first time and would not be the last.

With 26 moves in six months time, he does not now remember the name or the job or much about the larger reason for being on the property. He does not even remember which county he was in, although he remembers it as being in the Sierra foothills east of Sacramento and north of his latest residence in Auburn, Placer County.

The memory that stands out was an observation about the property that he related to his Sacramento supervisor.  The boss was displeased when Footloose Forester told him that the freshwater spring presumed to be on the owner’s property, which was up for sale, was not actually on the man’s property.  To make matters worse, the Footloose Forester had the temerity to suggest that perhaps the US Geological Survey map of the area was wrong with respect to the actual location of the spring, surrounded by forest land in every direction. The presence of a spring was a big deal, especially in the dry foothills of the Sierras, and particularly on a parcel of private land that was surrounded by national forest administered by the US Forest Service.

Official maps often have errors on them.  The Footloose Forester does not recall working with many maps that did not have some errors in them, at least those maps that he used repeatedly and thus was very familiar with. Sometimes the errors were small ones, sometimes they were major misrepresentations that lead to legal problems. He first became aware of the shortcomings of printed maps during a training exercise for forestry students and other summer employees on the Kootenai National Forest in Montana.

The headquarters staff conducted a compass reading, pacing and tree marking exercise for its summer helpers to sort out how the students stacked up, and how the staff would utilize the summer workers in the woods.  During one exercise, one of the officials showed us a USGS map that had a major mistake in the placement of a forest road.  The man who conducted the exercise showed us on the map our location on a road that contoured around a hill. The problem was that the road was on our side of the hill but the map showed the road as being on the other side.  No problem when all of the land was part of the Kootenai National Forest, but could be a problem if the location of the road extends into private holdings.

Perhaps the biggest mapping blunder of all times came about in 2009 when satellite imagery and other high-tech tools demonstrated that the precise location of the famous Four Corners area where Colorado, Utah, New Mexico and Arizona come together is actually off by at least two miles.  The Footloose Forester was taught to question everything, so in retrospect does not feel dismayed about challenging the exact location of a rare source of fresh water that was important to everyone in that area of California. Thus, this memoir continues.

As he recalls the episode, Footloose Forester was instructed to go to the property to verify the boundaries, if he could find them, with the aid of a forester’s chain and a staff-mounted compass.  His assistant was a summer employee and a forestry student at a college in the Sacramento area.  Upon arrival at the property, they started on the northwest side where they could verify their location on the map, then proceeded south to the presumed SW corner of the property.  Upon arrival at a marked corner, 40 chains (1/2 mile) south of the road, they were satisfied that the mounded rocks on their compass line did, indeed, represent the SW corner of the property.  They then proceed due East to search for the SE corner.  About halfway they started looking for the spring that Footloose Forester was told was there near the South boundary. They found the spring, but it was south of the East-West line they were following.  The implications were clear:  if the mounded rocks they located on the presumed SW corner did, indeed, mark a turning point, and if they were following an accurate E-W line to the SE corner, then the solitary spring was on Forest Service land, and not on the owner’s land, as shown on the map.

When he later told his supervisor that the spring was misallocated on the map, the boss was not happy with the Footloose Forester. Of course, most people tend to believe official maps, even other foresters who know that not everything they see on maps is accurate. And truth be told, from that day onward the boss probably did not trust the Footloose Forester.  That is one reason why he felt compelled to check his observations with additional evidence, and then let other people compare their own opinions to the findings that he offered as facts. On the other hand, his predilection toward verification in instances where evidence might be challenged usually led to the alienation of associates and co-workers.  Being your own man had its price.  Now, for the other half of the story. 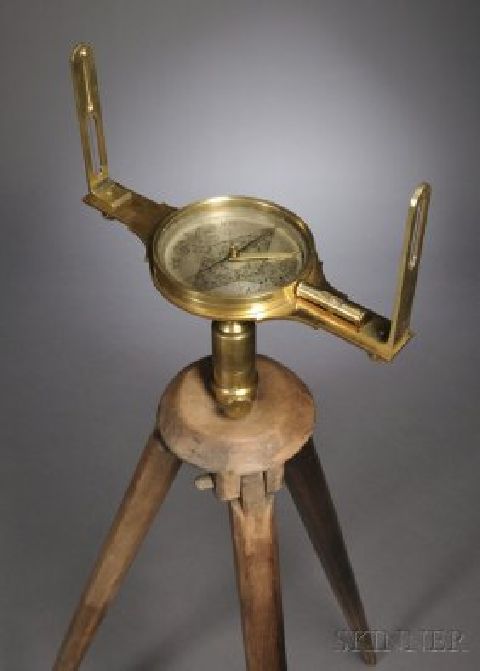 Footloose Forester and his assistant, who did not have surveying experience or any opinion about what they were doing or seeing, doubled-checked their measurements by re-measuring the distance from the North boundary to the South boundary, but this time in the middle of the property, 20 chains (¼ mile) in from the NE corner in the 160 acre property that was depicted as a square on the map.  If we kept accurate bearings from one corner and along the compass line on the E-W line to the turning point, and then turned south and measured to the parallel E-W line at the South boundary, we should have seen the spring within the owner’s property—if the map was right and our measurements were off.

When we measured 30 chains, we passed the place where the spring was supposed to be.  At 40 chains, we looked left and right and saw the E-W line that we had surveyed earlier, confirming that the distances we measured were accurate.  More important, it confirmed for the Footloose Forester that the spring was not on the property.  It was about 50-60 feet beyond the property line. But did his boss ever take his word for it?  Would the boss ever mention to the property owner (and a paying client) that there was no freshwater spring on his property?  Would the boss ever check for himself, on a tiny 160-acre property over 100 miles from his office?  And when he got there, would he be prepared to toss out an old but convenient presumption in favor of a very distressing reality?  We can leave those presumptions in the past.  One wonders, however, if the boss swept something under the rug.

Going Inside An Egyptian Pyramid Wasn't On the Buc...
Hitchhiking Is Now Just A Memory