Random thoughts of Africa came in a dream last night, so the Footloose Forester decided to stitch a few of them together in a chronicle that might be labeled The Scariest Things.  First and foremost, of the many things in Africa that could have been scary if the circumstances were different, the most haunting memories were all about the crocodile populations.  Kenya had both saltwater crocs that patrolled the brackish waters along the Mombasa Coast and elsewhere, and numerous others found inland along the shores of a few infrequent lakes and streams.  At long last, the nightmarish image of a congregation of more than a dozen crocodiles in the Mara River of Kenya has made its way from a nightmare into words on a page.

Maybe it is unusual to see more than a dozen crocs swimming in the same restricted waters of a fairly narrow river but that haunting image of 14 of them at the same river crossing point of the Mara River was akin to witnessing their annual and ceremonial festival of feeding during the grand wildlife migration in the vicinity of the Serengeti of Tanzania and the Maasai Mara of Kenya. The annual migration is monumental, spectacular, unforgettable, and somewhat beyond words. It is like a three-ring circus that draws your attention in all directions at the same time. It would be enough to be overjoyed in seeing large herds of wildebeest, hartebeest, and Cape Buffalo at rest but to see them rise and prepare to follow their leaders in lines to the next locale is awe-inspiring.  The sounds of the hoofs are accompanied by the shaking of the ground as they pass by. But there are many other species that migrate during the same timeframe. Zebras, gazelles, impalas, giraffe, etc.  And their predators, the lions, cheetahs, the leopards, the jackals, and the hyenas. But somehow, the scenarios were not scary to behold; they were all there to feed.  The crocodiles in the Mara River were also there to feed, but they were scary to behold, doubly so because at least half of the time they were submerged to await the arrival of unsuspecting ungulates as they prepared to cross the Mara River.

As he stood above the steep bank of the river safely away from the 14 crocs that he counted just below him, the Footloose Forester became mesmerized as he watched as some of them surfaced and some of them disappeared into the brown muddy waters at the narrow crossing point. It took some time to settle on the number 14 but in retrospect, repeated counts of 14 gelled into his head, all of them waiting in the muddy water at a strategic crossing point. 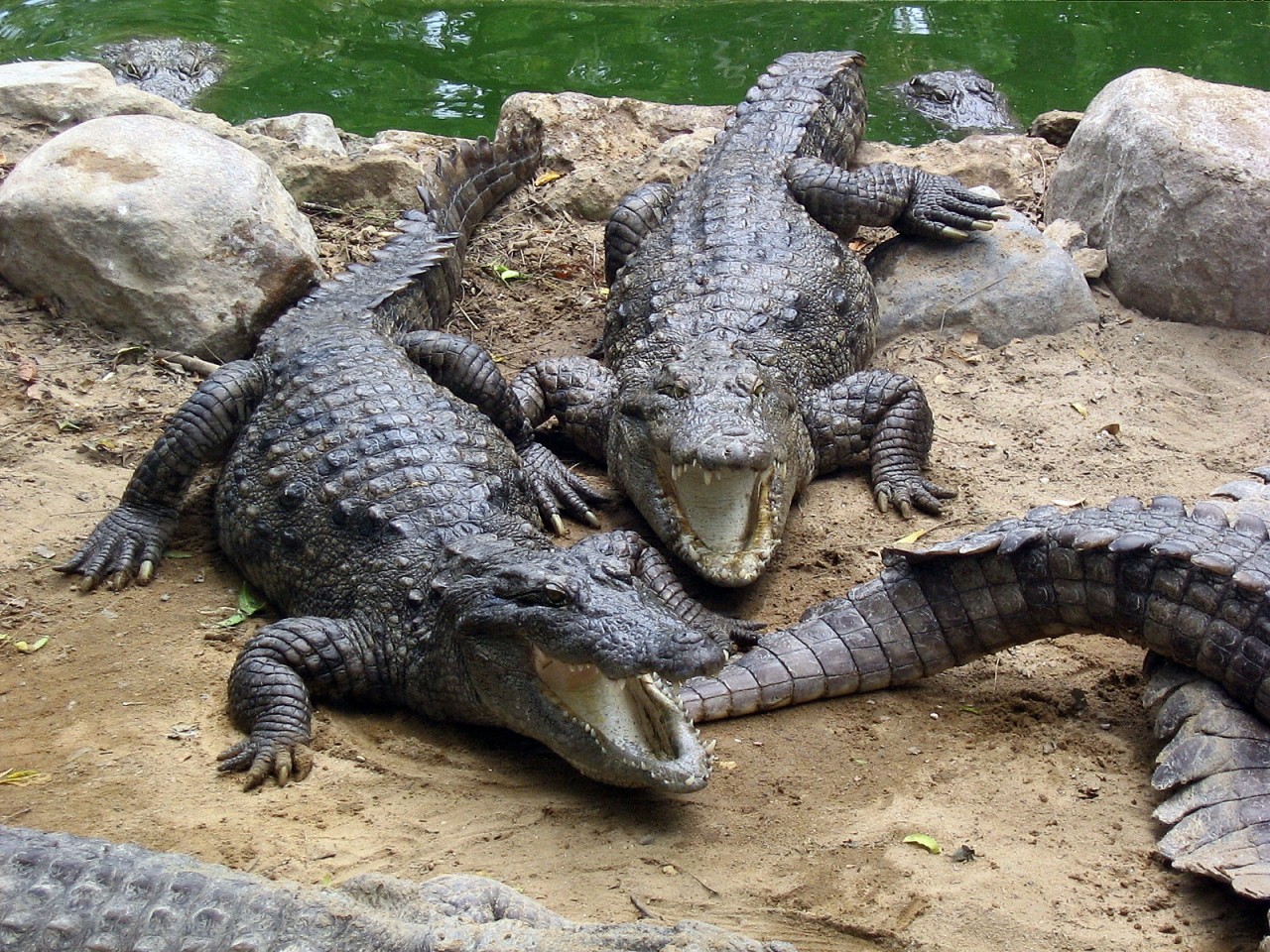 These monsters need no introduction

That particular crossing point was perhaps ideal for the crocs themselves because although the level plains on both sides of the river did not pose a danger to the hundreds, perhaps thousands of animals that trod the game trails on their way to and from the river, when they reached the low, mostly vertical banks of the river they had to make a decision where to cross.  Game trails are not found everywhere and there are reasons why some are heavily used and some of them are not.  Descending one steep bank is the first consideration, crossing at a narrow point where the water is usually more shallow is another, and transiting quickly through the water to the other side is another.  Herd leaders know the dangers, including the fact that after successfully evading the crocodiles in the river itself, they have to negotiate an equally steep riverbank on the other side. A fair number of migrating animals become victims to crocs as they enter the water, as they wade or splash their way across, and as they attempt to mount the steep bank on the other side. Making it across does not assure safety if they cannot mount the bank, or remain on the narrow trail that is crowded with other frightened animals. The evidence of blood on the rocks and the remains of previous victims is enough to make the crossing of the Mara River a very scary tableau.   And it makes that prospect one of the scariest of memories that Footloose Forester recalls from his limited time in the Maasai Mara.

On one occasion, a local Maasai guide beckoned us to come upriver several hundred yards to see a giant crocodile basking in the sun on a narrow sandbank adjacent to the water.  The guide had seen plenty of crocs before, thus made a point to us that it is not every day that you see a 22-footer.  We were not going to dispute the length, but it was, without any doubt, at least 20 feet long. Scary!  A final dark memory of crocodiles rounds out this retrospective chronicle.  It had to do with the same (day trip) safari to the Maasai Mara.  For whatever reason, our small group stopped at a rest house some ten miles away from any river; and for whatever reason, the guide led us into a small forest to see something unexpected.  Maybe he knew what was there and what to expect, but he kept it to himself.  Amid a large expanse of territory that was bone dry, he led us to a shallow depression that had a perched water table and featured a shallow freshwater swamp.  As we traversed the margins of the swamp, we heard a loud grunt, a sharp whacking sound and the sight of a sizeable crocodile as he scurried from his basking spot on land to the safety of the center of the swamp.  It was fair to say that he was probably as scared as we were.

A Macedonia Romance
The Parody Defense