Not many people who lived in the valley where the Saó Jorge dos Orgaós research station was located had electric power.  In fact, it would be accurate to say that the only people who had electric power were the people who lived or worked in facilities that were part of that research complex of the Republic of Cape Verde.  As expatriates who were privileged to live on-station and enjoy the daily sight of the small butte shaped like an organ pipe, for which the locale was named, the Footloose Forester and his Bengal Tiger wife enjoyed the amenities that were possible with the electric power that was provided by the German technical assistance agency, now known as Gesellschaft für Internationale Zusammenarbeit, or GIZ, to the Republic of Cape Verde. The Germans had installed a generator and housed it in a shed, laid electric lines to various barns, laboratories, and to staff residences.  We occupied one of those residence facilities.  Our quaint little four-room house was, in turn, financed by our own American aid agency, The Agency for International Development.  When it was nearing completion, electric lines were extended to it and were powered up. 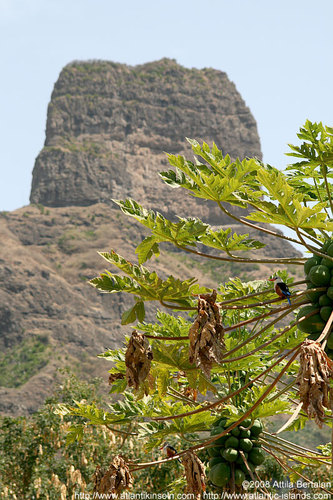 Butte visible from our patio*

The furnishings and the appliances in the little house were basic but much appreciated.  We had one of the very few microwave ovens in the whole country, and we had a spacious refrigerator to keep leftover food cold out of reach from the swarms of ants and flying insects that visited our idyllic island paradise near the onset of the monsoon season each year.  The monsoon season in semi-arid Cape Verde is perhaps not what people at home imagined it to be. One year it rained only three times, and only two times the following year.  Nevertheless, the swarms of flying insects that awaited the onset of the rains made their presence known in a brief period of a few weeks when the skies began to cloud up and the humidity began to rise.  We knew when they made their presence known because they visited our modest home in their thousands.  Hence the need for a bug zapper—an electric bug zapper.

When early evening came and the flying insects start to appear, the Bengal Tiger plugged in the electric bug zapper.  There was a cacophony of zap, zap, zap as they congregated and succumbed to the fatal bright lights of the zapper.  In the morning, we had to disconnect the zapper and clean out the elements in anticipation of the next round of evening zapping.  Having electricity was not taken for granted, and our zapper made it a little more comfortable.

The always thoughtful and inventive Bengal Tiger had another task in mind for our electric power capabilities.  When a huge rat decided to make his (or her) nest in the insulating material in the back of the refrigerator, she devised a way to make the rat unwelcome.  Somehow or other, she bared an electric line and attached it to the back of the frig.  When the rat crawled into the insulation, said rat was electrocuted into the afterlife.  As it turned out, the Bengal Tiger also managed to, and at the same time, short out the entire electric grid in the valley.

We did not know the extent of her accomplishment until later that day when the farm manager, who lived next door, said that everybody and everything lost electric power. Footloose Forester and Bengal Tiger had to suppress our laughter for quite a while, but when we were alone we enjoyed many laughing jags about that huge bug behind the frig that she had zapped.

* The photo above of a scenic little butte may have had the little kingfisher sitting in a papaya tree as the primary objective of the photographer.  Some people believe that the small kingfisher is a sub-species unique to the Cape Verde Archipelago.

Ghost Towns
Can I obtain relief from QuickBooks unexpected err...