With all the talk about deforestation and the evils of cutting down trees, people everywhere should remember that humans have been cutting down trees ever since they invented the tools to do so.  The practice of harvesting trees for posts, poles, and construction wood began just as soon as people realized how valuable trees were in fulfilling many of their needs.  And with the coming of the industrial revolution and the invention of huge, powerful machinery, not only was it possible to cut down large trees, it was now possible to haul them away.  Along the way, the invention of gasoline-driven chain saws and tractor driven vehicles made it possible for a man to extend his range deep into the forests to extract trophy trees.  What foresters now call the single tree selection system of harvesting, has been for two centuries or more, a practice that they also call high-grading. 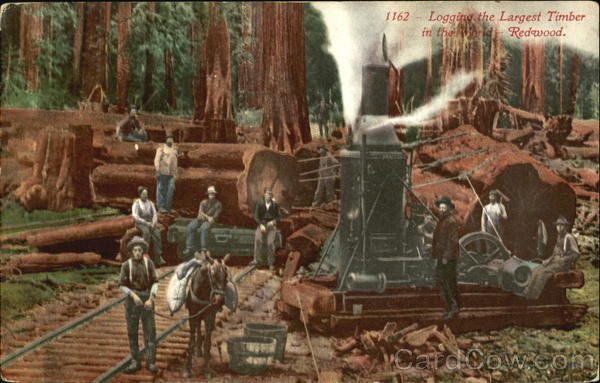 This chronicle does not pretend to sound the trumpet of a deep historical knowledge regarding the subject matter of high-grading as a common practice in forests around the world, but merely to point out that anyone who shows an interest in viewing old photographs of the logging industry will surely discover that old-time loggers took pride in posing for snapshots with their trophy timbers.  A deep-sea fisherman is more eager to pose for photos with a 1000-pound marlin than with a pan fish small enough to nestle into his cupped hand.

Thus it was, in the opinion of the Footloose Forester, that the quest for a production quota of timber from any given tract worked its way into the decision to select trees large enough to fill the quota quickly, with the equipment that could handle both large and small trees.  Why cut 20 small trees when cutting a few large ones would meet the quota?  Besides, larger trees tended to have more valuable heartwood, were able to provide longer, straighter boards, and had relatively less waste, as slabs and exterior trim.  If the machinery could handle the size and weight of large trees, they became the individuals of greatest interest in logging operations.  They became the favored prizes in high-grading logging operations.

Not all high-grading operations pertained to timber trees.  In decades past, natural forests in tropical areas were exploited for such things as natural rubber (from the occasional Ficus elastica tree), and aromatic oils from sandalwood species of the genus Santalum that have a longer history of exploitative harvesting.  Needless to say, forest dwellers have long harvested nuts and several kinds of tropical fruits from deep within natural forests.  To say that there still are virgin forests, despite the seeming remoteness and fully stocked appearance of primary forests, is debatable.  But for the most part, high-grading—past and present, has concentrated on commercially valuable species of timber trees, a few of which are household words. Teak, mahogany, ebony, walnut, and redwood are a few examples.  In Central America and South America, in general, the over-exploitation of mahogany trees led to a depletion of growing stock so severe that in some places restrictions were placed on the logging of mahogany.

There are a few references in Maya Empire history to suggest that Maya emperors favored certain species for their pet construction projects.  Perhaps it had to do with the favored color of the heartwood, or the need to have large dimensions to accomplish the projects.  The subject matter leaves a lot of room for speculation.  At some point, there is also the issue of the choice of species that possess the working qualities and aesthetic appeal that become the primary factors for which some species were favored, in other places and in other cultures.  Appropriate size, desired working qualities, and aesthetic appeal are all attributes that presumably pertained to species that were high-graded everywhere. Those attributes and widespread appeal still pertain to societies everywhere.  They influence contemporary forestry practices.  Loggers still salivate when they have a potential trophy in sight and is duly marked for cut with the tree paint of admissibility.  Single tree selection, or high-grading lite in regulated forests; and illegal logging and timber piracy in places where regulations are lacking or where corruption abounds.  A few countries come to mind:  Congo, Madagascar, and others; but this chronicle is not intended to level charges, only to note that high-grading and illegal logging go hand in hand because the payoff seems to influence the temptations.

Laymen should not get the idea that single tree selection favors only potential trophy trees of large size.  Responsible foresters and land managers who are tasked with good land stewardship practices have a self-imposed obligation to improve the residual forest by marking for cut a certain number of diseased and dying trees as well as healthy but overmature trees.  If there is a healthy, large tree in the mix, all well and good.  Getting a good balance between promoting augmented growth of the residual stand, and systematically reducing or eliminating diseased and inferior trees is part and parcel of the art of forest management.  Trees are, after all, among nature’s most readily renewable resources.

Calling B.S. on ...
The K-Turn and Mountain Roads