Exercises For Geezers: The Birthday Challenge

When he was a teenager, the future Footloose Forester saw a small graph in a local newspaper that showed how physical capability peaked in adolescence, then continued on a plateau until age 55, then began a straight line decline into later years. There was also a short article that accompanied that graph. Maybe the article gave the justification for the graph, or the graph justified the article; but such details are now forgotten. What is remembered now is only the graph. For whatever reason, the active teenager reading that newspaper article wanted to find out for himself if it turned out to be true.

He already had an exercise routine, but during ensuing years as a practicing forester, he tried always to keep in shape if for no other reason than to be prepared to face the many physical demands that regularly came his way. The most common physical demand, he speculated, would always be climbing hills and mountains as a working forester. Yet, having upper body strength was also important. Strength, endurance and long-windedness are all assets that serve anyone well, and he wanted to be as fit as possible.

Most teens mentioned push-ups as the key indicator of their physical ability; and when kids got together and compared notes, the number of push-ups was the only thing everyone related to, or had in common in their exercise routines. When he was 17, the future Footloose Forester worked up to 65 push-ups. That was his personal best for the next 43 years.

He never sought to go beyond that, but consciously kept a number high enough to make exercise periods long enough and taxing enough to be worthwhile. In the meantime, the age 55 plateau came into the picture. He never noticed a reduction in strength, so kept pace with about 50 push-ups until he was 60 years old. At that milestone age, he decided that what he had read as a teenager was not necessarily true for everyone. He then decided to set a goal and call it his birthday challenge. The goal was to boost the number of push-ups back to 60, to match his age. 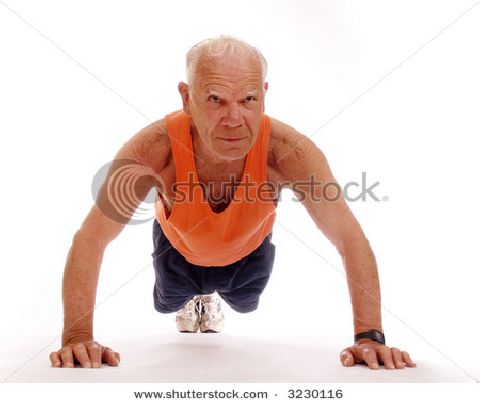 On his 60th birthday when he dropped down to the pavement to meet the self-imposed challenge of 60 push-ups, the Footloose Forester realized that he had more in him than just 60 push-ups, so went to 75 before quitting.

Well before his birthday rolled around the next year, he continued to raise the limit, but without setting intermediate goals. When the age 61 birthday challenge came up, he decided that he would change the challenge to (age X 2) as the goal. So early in the morning on 24 August, he focused on the number 122. It was not only doable, but actually less difficult than straining to make 65 when he was 17 years old.

Since that time a decade ago, the Footloose Forester kept exercising on the pavement astride his house every month of every season. Summer or winter, twelve months a year; although he would not keep a strict schedule when it rained, or when there was snow or ice on his favorite section of pavement. He slipped below the (age X 2) target during the year, but built it back up to 124, 126, 128, etc. for each birthday challenge.

At age 66 he lost track of the count toward 132 and suffered a mild heart attack after quitting at 136.  No, the doctors assured him, he didn’t go too far; he might have had a heart attack many years earlier if he didn’t keep active. Not to be deterred, by the following year the target was back to 134, just to meet the birthday challenge.  A lot of that challenge was mental: if you think you can do it, you can.

This little tale now comes to an open-ended cessation. The goal of 140 at age 70 may have seemed like a good place to stop, but when the time came he said... what the heck... and did 156 the day after his birthday. Sometime after August when he reached age 71, he attained a personal best far beyond that 65 push-ups during his teenage years. The 166 push-ups came after the 80 jumping jacks, 80 leg risers with the left leg, 80 leg risers on the right, the 80 cross-risers and the 80 stomach crunches.

The Footloose Forester was convinced that regular exercise was good for him, regardless of whether or not the neighbors thought he was nuts.  So, as the age 72 (age X2) challenge rolled around, he kept the minimum at 130-140 just to be mentally and physically prepared. On that day he attained a personal best of 170. No more counting.  But no more quitting, either.  Muscles and joints always feel better after a workout.  And you don't have to give up push-ups just because you have white hair.

The year 2014 put a real kink in his exercise routine.  He had major back surgery, and was instructed to lay off the heavy exercises for several months.  It would be at least six months before he was ready to get back in shape.  These days the exercise routine focuses on limbering up his back and strengthening his legs.  The fancy stationary bicycle simulator in the fitness room does, nevertheless, allow him to set reasonable goals:   a minimum of 15 minutes at Level 7 of effort;  a calculated distance of 5.5 miles; and a heart rate that rises to at least 130 beats per minute.  That machine just might be the best thing for him at age 76.  On the other hand, he is back up to a minimum of 100 push-ups, so is feeling confident about the future.

Now that two more years have passed and the Footloose Forester at age 79 is beyond the effects of back surgery, he is anticipating going back to playing golf.  He is more cautious these days, but tests his strength and dexterity in little ways as a way to stay in shape.  No more (age X 2) push-up challenges but just in case someone asked, he managed 100 on his birthday.  If you think you can do it, you can.