For much of the last 30 years, the issue of the environment has become a political football, with political parties lining up on opposite sides of that football.  That is too bad; although the political teams play the game zestfully with their own brand of offense, defense, and game strategy. The football, itself--the environment--should not incur the penalties.

We have only one environment. As stewards of the land and the sea, we owe it to posterity to protect the earth from harm; while intelligently exploiting its resources that we need to survive. It may seem to be expensive to design and implement environmental safeguards, but there are enough graphic examples where environmental disasters resulted from inadequate safeguards to remind us that the consequences of failure can be very much more expensive than the safeguards.  The Chernobyl disaster in Ukraine in 1989 and the Fukushima Daiichi reactor meltdown in Japan in 2006 are but two examples. Billions of dollars were lost in the aftermath, not to mention the immediate and subsequent loss of life.

Another environmental disaster took place in a remote part of the world in 1999.  It may not have made the front pages in newspapers because it took place in the remote headwaters of the Ok Tedi River in Papua, New Guinea.  The reason why it becomes the subject of this chronicle is that the Footloose Forester had a good shot at becoming the environmental monitor of the Ok Tedi Project before it came to fruition.

That was back in 1981 when the Footloose Forester was Staff Ecologist at NUS Corporation in Pittsburgh, PA.  Our company put in a bid to manage the environmental oversight activities of a proposed mining operation in the rugged highlands of Western Papua, New Guinea. The background and evolution of the project are subjects that are interesting, in their own right.  There is some history about Ok Tedi that can be researched through the Internet.

An aerial survey of the region had detected a volcanic dike thought to be capped with gold and underlain with copper.  The photo below shows the active mine, with a red-line border indicating the approximate boundaries of the original dike. It should be noted that, as part of the bidding process, NUS was given a project document whose cover displayed a stereoscopic photo of the roughly circular dike that protruded above the general level of the surrounding terrain; and was to become the site of the proposed mine. History now records, with before-after photos, the development of the open-pit mine; and the unfortunate environmental disaster effected on the Ok Tedi and Fly River system. 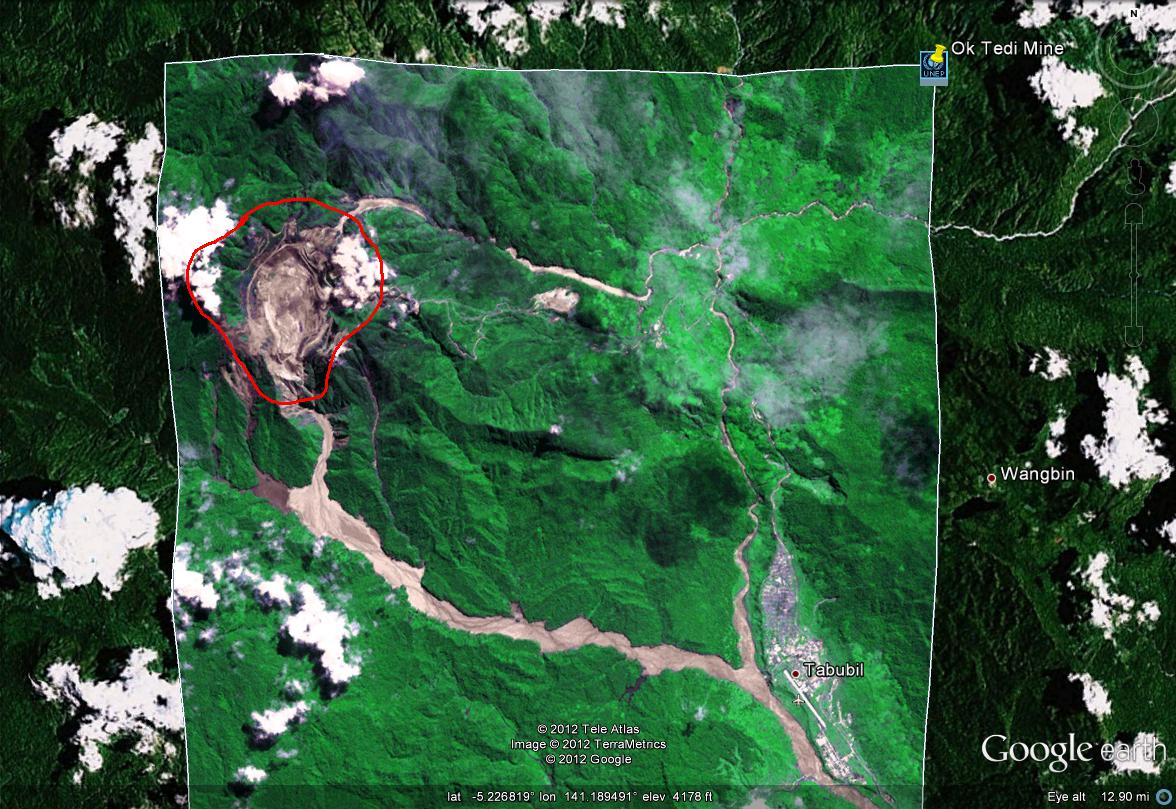 Red-line perimeter of the Ok Tedi Mine site....flooded river system downstream is delineated

On the inside pages of the project proposal document, the Australian company known as Broken Hill Properties that had assembled the document and invited the bidders, signified the economic importance of the mineral resource at Ok Tedi by revealing that the assay of the surface and cap layers of gold had an estimated worth of $4 billion dollars; and the thicker underlying layer of copper was worth $9 billion dollars. It just so happened that Broken Hill Properties owned the land. They purchased it from the local inhabitants.  One can only assume that they did not tip their hand about just how valuable that chunk of rain forest really was.  On the other hand, the forest inhabitants of the region had no history of mining, nor the heavy equipment associated with the extraction industries.  Truth be known, gold in the ground has no value until it is extracted and converted into forms that are immediately valuable.

It would be worthwhile to develop this brief story into a living chronology of the actual events that led to land degradation and environmental disaster.  There are important lessons that should be shared by landowners, local and regional governments, environmental planners, and politicians; alike.  For the moment, however, it is merely one obscure tale by the Footloose Forester who had a high probability of becoming the Environmental Monitor on the ground at Ok Tedi.  Although there were five bidders for the project portfolio and the Footloose Forester was proposed as the (resident) consultant on four of those competitive bids, in the end the job went to the fifth firm. That firm was Broken Hill Properties.

It would be more than raw speculation to say that BHP alone looted the gold, exploited the copper reserves; and then abandoned the area; because they had a consortium of European mining associates who jointly participated in despoiling the upper reaches of the Ok Tedi and Fly River systems.  And while this chronicle is not intended to point fingers, it does invite the reader to pay close attention to the downstream damage to the environment that was wrought.

Preventing Alzheimer's Disease: All You Need to Kn...
Rain Shadows and Rainforests

Bill Corey - Fighting the weather and the Japanese in New Guinea