Once again during his later years, the Footloose Forester was inspired by a dream to craft a chronicle about something that might not otherwise stand alone as an interesting story. As usual, the thoughts are extracted from different places and at different times, but with a common theme.  His sub-conscious impulse kept telling him to drink the water. Usually that advice, medical and otherwise, is don’t drink the water—especially in Third World countries where water treatment plants are not very common.  Common sense tells you never to drink the water unless you know that it was treated with chemicals; it comes in a trusted, bottled container; or you can be sure about its potability.

Perhaps most times people don’t even think about the water they consume from bottles, public drinking fountains or from faucets in their homes.  In the USA, Canada, and most European countries, the water is safe to drink, provided you are drinking from municipal water sources.  But what about outside of town? or in the mountains? or in the desert?  As a forester who spent most of his working life in rural settings, the Footloose Forester was frequently faced with being thirsty or not having his own personal bottle of water nearby.  Starting out with a canteen full of water, or a water bag hanging from the side-view mirror of your jeep was the proper way to prepare, but at some stage you get separated from your water supply but not from your thirst.  So, the sub-conscious thought was ever-present—drink the water. 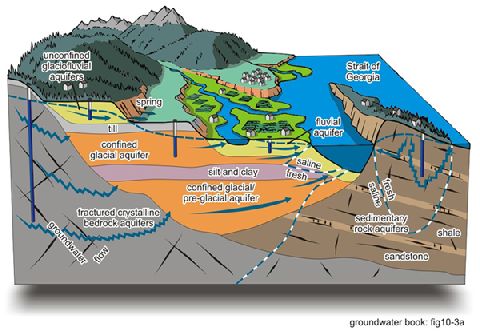 The issue was how to decide whether or not drinking the water around you was a good idea, or whether or not drinking it was going to make you sick?  Over the years, the Footloose Forester drank water that other people may never have risked drinking.  He was not a daredevil or overly foolish. On the contrary, he probably gave drinking from local water sources more thought than other people; because he was equally conscious of how contamination could take place, regardless of how far afield he happened to be; and the consequences of getting sick far from medical help.  But there were times that he did drink the water from sources that others might shun.

One clear and powerful memory was the time he drank from a swift-running stream near the top of a hill in New Jersey. Yes, New Jersey, with its dense urban population and worrisome liquid discharges across the state.  He did not need a drink on that occasion; in fact, he was not overly thirsty. That was one of those times when he considered the fundamentals about what constitutes contamination sources, so he decided to enjoy the experience because the sources of contamination were just not there.

The spot was quite near the top of a small ridge overlooking the Round Valley Reservoir in Northern New Jersey; it was winter and he could see that neither human nor farm animal was above him in the terrain.  So he dropped down to a horizontal position and drank freely with his lips sucking from the flowing stream. One thing that was quite remarkable, however, was how strong the discharge was at just a few feet from the very top of the ridge. It is possible that the strong flow was augmented by an artesian effect.  Having grown up in the Netcong, New Jersey area, he learned at an early age that the water in Netcong was not treated because its source was a series of artesian wells less than a mile from his home. In later years, the authorities did treat the water with chemicals.

Another place where drinking groundwater was an issue was in the highlands of Lesotho. Getting there was by horseback and after three days out, we were running short of drinking water.  He can’t remember exactly what the situation with supplies was, but he does remember being thirsty enough to seek a safe place to drink from the stream in an upper pasture area. After he decided that the branch he chose was not visited by grazing cattle or sheep, he drank freely there until he returned to town.

Perhaps the most inauspicious place where he drank from the ground, however, was in Haiti.  Thoughts of the horribly polluted water sources in Haiti were often in the back of his mind.  The rivers were polluted, the lakes were polluted, and raw sewage was everywhere. Even in the countryside, there were so many free-ranging cattle, goats, chickens, pigs and sheep that the prospects of having clean water anywhere was always an issue. One of his pet peeves, however, was seeing so many polluted streams far from human influences. Although there was a clean water campaign in the region, and people sometimes tried to elevate groundwater discharge points by surrounding the intake pipes with low concrete walls surrounding the spigots, the animals that were attracted to the “water points” regularly defecated and urinated downstream beyond where the excess water was discharged.  The water originally coming into the water points came from uncontaminated sources, and the water engineers made sure of that. But what happened to the water downstream was a reversion to extreme pollution because of the farm animals.

Fortunately, the Footloose Forester was in the company of a water systems engineer one day when the engineer demonstrated how water sources were identified and chosen, and how the location of “water points” was determined.  So, even with heavily polluted water being the norm in Haiti, the Footloose Forester once again dropped to his hands and knees and drank gratefully and knowingly from a hillside trickle.

Most times in the forests, nevertheless, the water was safe to drink.  He seldom questioned the potability of water in the seeps and rivulets of streams far from industrial sites, especially if the water sources were above industrial sites or other human influences in the terrain. He remembers the satisfying quenching of his thirst in the mountains of Idaho, Montana, California; and even in the Laurel Highlands of Pennsylvania. So satisfying were some episodes, that they are now vivid memories, not to be forgotten or taken for granted.  Water is life and the Footloose Forester did not ever want to take life or clean water for granted.

Embarrassing Moment #98 in my life: The Fried Egg
Digital Photo Organizing 101 - Get In The Habit!

A Rare Species of Palm Threatened With Extinction