It was just another day in the woods.  Ed Tunheim, the senior forester for Cal-Pacific Forest Consultants, was in charge of several small contracts to inventory the timber on the properties of local landowners. Most of the parcels of land south of Santa Cruz were pretty small, maybe 50 acres or less, so Ed and the Footloose Forester split up to conduct the inventories as one-man tasks. Each morning Ed would drop the Footloose Forester off at the starting point, and then pick him up at the expected rendezvous point at the end of the workday. On one of those jobs, Ed took charge of one sector a few miles away and left the other sector in the hands of Footloose Forester. There was nothing memorable about that job, except the memory of what was growing there. This brief flashback is about two things that are worth mentioning about the trees of coastal California.

Ed lived in nearby Capitola, and the jobs among the redwoods were quite close and routine, but to the Footloose Forester who was raised back East, most everything about the redwoods was new and exciting. He did most of his consulting assignments out of the Sacramento office, so was considered as one of the Sierra foresters. We joined forces with the Redwoods foresters of Cal-Pacific when the workload demanded it; and this was one of those times. 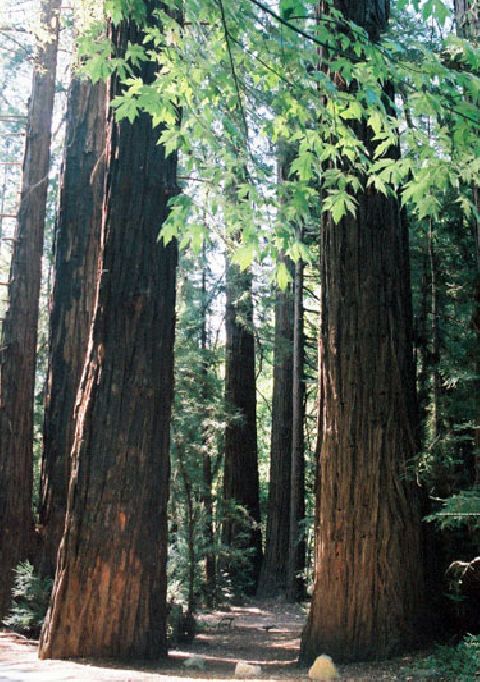 On his way to the top of a ridge, and along the designated compass line, the Footloose Forester came upon the stump of an ancient redwood tree. It was a very large stump, with an estimated diameter of almost 12 feet.  By the weathered looks of it, the tree had been cut down decades earlier. The tip-off was the size of the sprouts growing around the outside. There were 14 tall sprouts ringing the circumference of its stump. Foresters know that many tree species will sprout from the stump after they are cut and the coast redwood (Sequoia sempivirens) is one of those species. What made this one so unusual was the fact that each of the 14 sprouts was, in itself, now a tall tree big enough to harvest for timber. Since the spouts were all the same age, each of the sprouts had the same approximate height. The Footloose Forester had never before seen such a clear example of the renewability of resources that foresters like to cite as management objectives. Each sprout had an estimated 9 logs of merchantable timber. In redwood forests, logs are measured in 20-foot lengths; thus the old stump, even after it surrendered its massive 144 inch diameter trunk to an earlier harvest, left a legacy of 14 offspring that each towered to more than 180 feet. The scene was something that you won’t read about in textbooks. 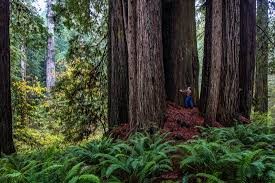 The Footloose Forester could only guess at the diameter of the original stump because the sprouts themselves prevented him from taking a direct measurement; that, and the fact that there are no instruments such as a diameter tape that is long enough to go around a tree that size.  So he paced around the outer perimeter to come to the estimated circumference of 35 feet, and divided the circumference by Π (pi) to arrive at his estimated diameter.

Another bizarre episode took place a few days later, on another property nearby. The landowner wanted to manage his land for multiple objectives; and one of those objectives was to use his property to grow Christmas trees.  Notably, he chose to plant Monterrey Pine, a species native to the Monterrey Peninsula of California but without known commercial value, including for Christmas trees.  One day the adult son of the landowner spotted the Footloose Forester in the woods and asked him to take a look at his small plantation of Monterrey Pine Christmas trees. What a shock! Several of the 3-year old tree seedlings were bent to the ground. They had toppled over from being top-heavy.

Normally a 3-year old stem is referred to as a seedling, if it is small; or as a sapling, if it exhibits the characteristics of vigorous growth. The Footloose Forester was puzzled about how to describe such young stems, because he had never before seen such specimens. He had a pruning pole of known length and a steel measuring tape, so was able to record one specimen that grew 21 feet between the nodes of yearly growth. That is to say, the 3-year old tree grew 21 feet between year two and year three.  Another specimen had a growth of 17 feet between the nodes.  Clearly, the Christmas tree objective was not going to work out because such tall, spindly trees were not going to be salable commodities. The point was, however, that Footloose Forester had never seen; nor would ever again see, any tree that grew so tall, so fast.  And that goes for bamboo, as well!  He spent many years as a forester looking for anything that could match that kind of growth, but nothing, even in the tropics, ever came close. Of course, that uniqueness is something else you won’t find in textbooks. The Footloose Forester was fortunate enough to work in redwoods of another name.  The giant Sequoia (Sequoiadendron giganteum) found in pockets of the Sierra Nevada Range are so awesome that he was always humbled whenever he came across one during a short consulting job in the Sequoia National Park.  As foresters, we did not advertise what we were doing, lest we be accused of being loggers intent on cutting down some of those stately giants.

Ode to the Oreo
Some Stuff You Just Can't Make Up