The Rhine River Froze Over

On the road …again!
Afghanistan to Zambia
Chronicles of a Footloose Forester
By Dick Pellek

The Rhine Freezes Over

There are times when you and those around you are not truly appreciative of the things and events in your midst.  As a soldier in Germany during the early 1960s, the Footloose Forester got to see a few things that he would never see on TV, never read about, never hear about, and never see again.  Yet, at that moment, he was privileged to see something spectacular.  In the winter of 1963 the Rhine River froze over.  Although the freezing of rivers is not unprecedented in far northern climates, to see the long, wide expanse of the Rhine frozen for dozens of miles in any direction is an impressive sight.  Seeing barges and small ships stranded in the middle of the river was a sight he had not bargained for; and seeing more than a dozen stranded ships from the overhead vantage point of an airplane only added to the vivid tableau.  As he flew overhead he wondered how much inconvenience and danger there was when the ships’ crews abandoned their craft until the ice broke up months later.

The winter of 1962-63 was the coldest in Germany during the 20th century, according to some news accounts at the time. Footloose Forester does remember that when the snow began to fall in November, it stuck and then stayed on the ground until March, 1963.  He was never very fond of cold weather; perhaps why deep down in his psyche he wanted to be a tropical forester.  Nonetheless, we all must play the cards we are dealt, and he tried to make the most of the circumstances.

As a soldier with cold weather gear, it was barely tolerable operating outdoors.  Most of the time, he had the luxury of working in a heated building; in the basement of an old Luftwaffe barracks, Fliegerhorst Kaserne or “flier’s nest.” His small special weapons unit had only a few staffers; and we worked in temperature controlled conditions, except when the whole battalion was deployed on field maneuvers. During one 3-4 day maneuver to a beautiful forest reserve, there were a few soldiers who developed frostbite, despite their cold weather outerwear and insulated boots.  The Footloose Forester pulled duty as a road monitor during that exercise, in addition to his regular responsibilities.  What happened during that exercise made for an especially strong memory of some events.

Road monitors were dropped off at intersections of key roadways to direct the military convoy onto the right routes. They were the first to be dropped off, and when the last of the convoy trucks had passed, they were supposed to be picked up by the very last vehicle, the one assigned to pick up all road monitors. After standing for a couple of hours in the wind and cold at his designated road intersection, Footloose was finally picked up, but not by the “deuce and a half” that was supposed to fetch him.  It was the Battalion Commander’s jeep that was late in leaving headquarters. They were shocked that he had been skipped. The temperature was well below 20°F, and it had been snowing off and on, all day. When we finally arrived at the bivouac area, it was after 10 PM and was pitch dark in the middle of the forest. The driver, probably jovial John Craner from Idaho, told him where his work section was located, so Footloose Forester got out and headed in that direction. Several times he ran across soldiers from other work sections, and they also directed him to his own unit, but he never found it in the dark forest quieted by the deepening snow.

After about an hour, it seemed, he came across the small, low trailer that his special weapons unit used to haul incidental gear. Everyone identified their own vehicles by the coded numbering system that was painted above or on the bumpers. He took one more pass looking for his workmates, and called out from time to time, but no luck.  Then he returned to the trailer and made himself comfortable tucked behind a heavy tarp. He slept like a baby and was as warm as toast. In the morning when it got light, he found his colleagues less than a hundred yards away.  They didn’t know whether to be mad at him for missing working through the night in the bitter cold, or relief that he had finally been picked up.  They had spent a cold night, and he had slept soundly in his down-lined sleeping bag.

One other event brands the winter of 1962-63 as something special.  At one point, he used one of the several 3-day passes he had earned, to travel to Berlin.  As a Special Weapons Technician, he had a secret security clearance and was not allowed to travel overland through East Germany.  He reassured the Battalion Commander that he would fly both ways, so was given permission to go.  He flew up with BEA, the British airline company that would subsequently go out of business.

The temperature at departure time was about -10°F, but he had committed to the trip. Looking back on the short trip, he now realizes how insane he was. The following day in Berlin was still below zero, but he decided to walk from his small hotel just off the famous Kurfürstemdam to see the bombed out ruins of the Kaiser Wilhelm Church, the most famous reminder of Allied bombing in Berlin; then to walk past the Brandenburg Gate toward Potsdammer Platz to Check Point Charlie. The infamous Berlin Wall was visible here and there, but in reality the wall itself did not stand alone as a continuous entity, but was discontinuously integrated with boarded up buildings and even included the Spree River, as part of the border between West Germany and East Germany.  He remembers the bitter cold of that winter, but cherishes the memory of Berlin and the frozen Rhine River. 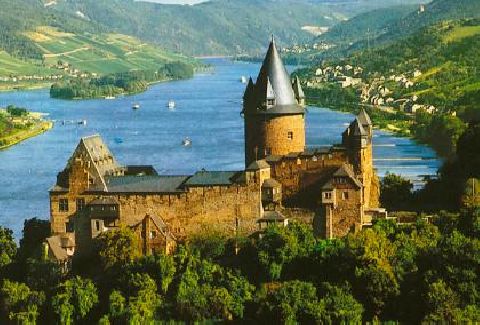 Finally, as an afterthought, he also recalls flying into Tempelhof Airport, the landing site of the Berlin Airlift in 1945-46 during which the Soviets were thwarted in their attempt to strangle the supply lines into Berlin, which was entirely surrounded by East Germany. As unlikely as it may sound, more than 30 years later, the Footloose Forester would meet one of the crew members who flew missions into Tempelhof during the Berlin Airlift.

Truth is stranger than fiction; at that same air show at Pittsburgh International Airport, he also overheard a conversation between a young German Luftwaffe pilot (who flew the Viet Nam War era F-4 Phantom) and a Brit former RAF pilot who flew Spitfires against the Germans when World War II raged over Europe.