H is for Hawaii

When it was over, the Footloose Forester blurted out in a public forum that the past six years were the shortest years in his life. They were probably the happiest years, as well; those halcyon days from 1971-76.  Dozens and dozens of time he and his soul mate, wife Thu, went into the bush to gather wild tropical fruit.  And dozens of times they harvested crabs after midnight in the shallow tidal pools in the vicinity of Koko Head on the Island of Oahu.

Getting started remembering is an easy trigger to pull, and when the memories explode, the fruits themselves dance like so many shotgun pellets. How was it that such a seemingly urban life of a student could have so many exotic memories?

One must consider the special circumstances whereby the Footloose Forester was daily near trees, vines, hedges, and forest thickets brimming with fruit that usually nobody bothered with.  When he wasn’t close enough, he made time to get closer.  On weekends, the soul mates often made plans to explore new ground. It wasn’t difficult; Hawaii has plenty of state forest and parkland where wild fruits abound.  Even on the golf course, the Footloose Forester would sometimes detour into the adjacent woods to pick a few guavas when he was hungry. 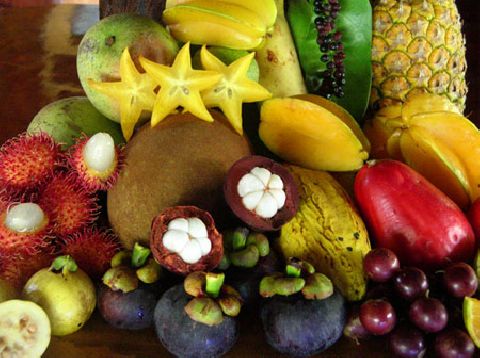 Roadsides and highway right-of-way zones always had coconut trees we kept our eyes on.  What? ...last night’s wind blew down three coconuts?  I’ll just stop my bike and put two of them on the rear rack, and then throw them under my desk when I get to work. The roadside trees also had various other fruits in season: mango, sweetsop, soursop, custard apple, Eugenia, breadfruit, jackfruit, malphigia, avocado, longan, white sapote, rambutan, guava, starfruit, and the occasional wild banana. Then, the University of Hawaii campus had dozens of planted fruits from around the tropical world.  Footloose Forester knew some of them, and some of them he had to read about before incorporating them into his diet. In the main, he regularly dieted on acerola cherry, Surinam cherry, Jerusalem thorn, loquats, kumquats, passion fruit, and pink guavas.  His favorite, however, was fruit from the Pieri mango.

His special mango tree was so isolated that he gained access from inside a dense hedge of something thorny.  His old office complex was inside that hedge, but in a fairly remote location so that making a daily trip to climb the mango tree didn’t raise any eyebrows or alarms.  He never saw anybody else there. There were a few other people who lived on campus or worked nearby, but when they wanted a mango, there were several other trees more conveniently located to where they passed. That special Pieri mango tree once produced fruit 13 months in a row, and the Footloose Forester can never forget how remarkable that is, for any tree in any climate, to be such a provider.

Once in a while, the soul mates joined with a Samoan friend in the military and made full-day expeditions into the heart of military properties that nobody else visited. Tony was in the Navy but had access to other military bases by virtue of his ID card. His Vietnamese wife was a pretty agile climber, too. She did most of the climbing into avocado trees and regularly scouted out the location of breadfruit and jackfruit trees on Oahu. So, we all geared up and made special days of it.  And usually came back with more bananas and other fruits than we planned to carry.

One time, we hauled out six stalks, each with about 10 hands of bananas, and each hand with 10-12 bananas in the bunch, say 600 bananas, in all. We were not greedy, and we always dropped off bunches for friends. Same for harvesting pineapples, or breadfruit, or tomatoes, or bittermelon, or sweet corn.  Footloose Forester was linked to a fair number of experimental plantings within the College of Agriculture, so was often an insider who was invited to participate in the harvests.  After the data were recorded, the fruits and vegetables went home for dinner, with several bags for all the neighbors.

Obelisk in Shadow
Dona Thu Stares Down A Marine

Dick, What age were you when this trip happened?

Dick, What age were you when this trip happened?
Cancel Update Comment

As a grad student at the University of Hawaii, I was about 32 years old. We lived in Honolulu for about 5 1/2 years.

As a grad student at the University of Hawaii, I was about 32 years old. We lived in Honolulu for about 5 1/2 years.
Cancel Update Comment
Follow