Part of the allure of being On the road…again!!! in so many rural places was the anticipation of knowing that there were going to be a few ghost towns here and there.  Most of them are in the West, and many of them are associated with the boom or bust days of prospecting for gold and silver. Of course, ghost towns can be found in other countries but the majority of them overseas have been supplanted in the mind’s eye of the traveler to the status of antiquities or archeological sites.  In the American West, and perhaps in Alaska, after the gold fever of 1849 along the American River in California and subsequently, in the Klondike, ghost towns remained after the miners and the prospectors for other fortunes packed up and packed out.  The mysteries of what may still be there is part of the anticipation when one ventures into the rural regions where they are likely to be found. Western states are dotted with them.  It should be understood that the words ghost town is a generic description.  Nobody says ghost building for an abandoned structure, even when referring to a structure in an urban area.   This chronicle begins with ghost towns in California, but a few in  Idaho also have some personal history attached to them.

A Footloose Forester who liked to travel and was well sated during the earlier years of his career got plenty of opportunities to discover an occasional abandoned building here and there; in Montana, Idaho, California, and in Nevada; on his way to or part of a consulting job, or during his weekend sojourns to find out where the dirt roads lead.  In a few cases, he knew that local maps showed the location of ghost towns and he made visiting them a part of his weekend adventures.

Looking back, he has a special fondness for the unpaved roads in the California gold rush country and the chance to witness the remains of ghost towns named Pike, Climax, and Alleghany.  There remains enough attraction in the travel industry to promote them as minor historical sites, but there is more to the story.  With the on-again and off-again financial interest in gold mining in California Gold Rush country, one of the “ghost” towns literally at the end of the road has seen a resurgence of hard-rock mining.  With the understanding that the Footloose Forester in the role of writing this chronicle can only relate to what he saw 60 years ago, he wants to share a few dreams of that past.

The old dirt road into Alleghany in Sierra County, California has been paved now, but to get there you still have to climb up into the forested foothills and watch as the valley below begins to disappear.  In those days, the land on either side of the road for several miles showed no sign of modern habitations.  Eventually, the ghost town of Pike was spotted off on the right.  Maybe it still shows up on old maps as a town, but there is no hint of that now. The same goes for Climax. The Footloose Forester remembers seeing the wooden skeletons of only two houses at Pike. and further up the road, another small ghost town of Climax showed only a few houses still standing, even 60 years ago.  Alleghany, at the end of the road, appeared to be in the same dilapidated and abandoned condition but was considerably larger.  The best part of the trip was yet to come.  At the end of the road, the last ghost town was actually in the state of a minor reconstitution.  That is to say, there were a few people living and working there; and that is a big part of the story. 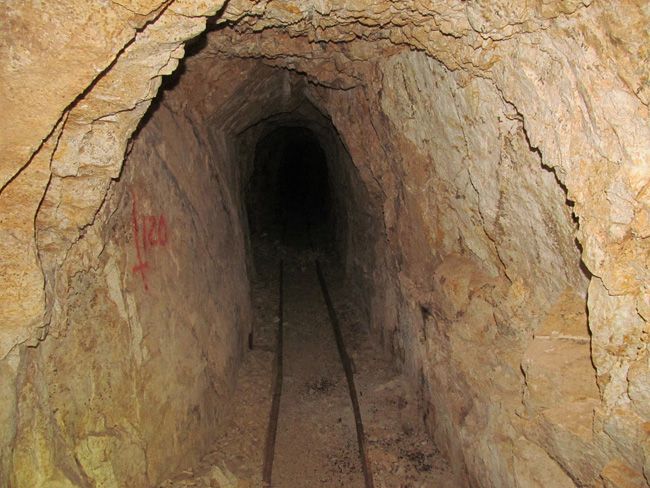 Entrance to a hard rock gold mine

The completely weathered exteriors of the buildings there showed some signs of activity, but not much else.  If memory serves, one of the better buildings was a saloon constructed from local timbers.  As you entered from the outside, you pushed past the swinging doors that one so often sees in old western movies, and your ears pick up the sound of a player piano sitting against the wall to your left.  Yes, a player piano and swinging doors in this saloon.  The owners probably wanted to reconstruct an authentic original setting—and they succeeded.   The beer at the bar was a modern brew.

The big serendipity in the unscheduled trip to Pike, Climax, and beyond came at the end of the road at Alleghany.  A short jaunt down the sidehill to see the mine opening was a bit of perfect timing.  A crew of miners tucked into mining cars were just entering the mine itself, cut into the side of the hill.  It was a vivid scene of gold mining being sustained in a period when the price of gold also made the re-opening of some other mines in the region a profitable prospect.  The Footloose Forester had no idea that hard rock mining, complete with modern mining cars was still in operation, but his fortuitous visit at just the right time got him a glimpse of both the past in a former gold-mining town and the present reality of mining crews going to work.  With a little research, thanks to Wikipedia, he learned that the 16-to-1 Mine at Alleghany never went out of production and has been a major gold producer since the days of the California Gold Rush.  And these days, that old-time saloon with the swinging doors and player piano is known as Casey’s Place.

A few years earlier, the Footloose Forester became aware of the scattered skeletons of abandoned buildings in former mining regions in Idaho and Montana.  He was always curious how the town of Jacques Spur, Idaho became prominent enough to have its own post office.  As far as he could see, the one and only building in Jacques Spur, Idaho (population 5) was the post office building itself, its name prominently displayed on a wooden sign--U.S. Post Office, Jacques Spur, Idaho. It was closed when he passed by, so he was unable to gather evidence for his personal files.  Another town that was quite lively when he was working in Idaho was named Golden.  It was (past tense) situated along the bank of the South Fork of the Clearwater River.  Some years later, the town was abandoned and Golden became a ghost town.  Truth is stranger than fiction.

Yesterday the Subject was Tigers
The Bug Zapper