Burundi is Rwanda's Neighbor and Shared the Same Genocide

In the first couple of years that the Footloose Forester visited the United Nations-funded government building at Rhuengheri on a regular basis, it was satisfying to know that the donor community was doing its part to keep a strong development agenda in Africa.  Modern offices, modern laboratories, and current research agendas…The improvements in agricultural technique, management practice, production increases; and the prospects of a brighter future were all part of the job satisfaction that the Footloose Forester placed on his Burundi experience and made the country one of his favorites to visit as part of his official duties as a monitor in the Agroforestry Outreach Network.

But that was before the tribal genocides of 1992-93 in which almost 900,000 people lost their lives.  Hutus on a rampage against the minority ruling class of Tutsis, in both Burundi and Rwanda. The result was a turning back of the clock and a prohibition against US development workers even entering those countries for more than a year.  In the meantime, the Government Building at Rhuengheri was taken over by some 600 refugees who were seeking protection from murderous bands seeking to kill them.

People back home in the United States perhaps better remember the genocide in neighboring Rwanda, by the same two tribal groups and with the same intensity of killing.  The movie “Hotel Rwanda” put the circumstances in a pretty accurate perspective.  In Burundi, the circumstances were almost identical but, to date, the Footloose Forester has never heard or seen a historical linkage made to the ancient tribalism that actually overlapped in time and in proximate geography. 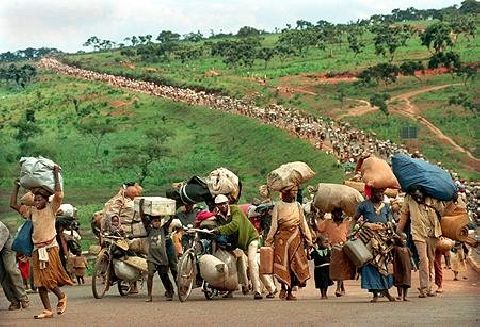 Lines of refugees fleeing for their lives; in Rwanda and in Burundi

After he returned to Burundi in 1994, Footloose Forester toured the border region with a French development worker who showed him where entire villages were deserted as Tutsi villagers fled across a narrow river into Zaire. Hutu gangs came to his house and demanded to use his pick-up truck.  Whatever reason they gave, he knew that they intended to hunt for Tutsis.  Since they were hostile and heavily armed, he told me he had no choice. And the Footloose Forester never did go back to Government Building at Rhuengheri.

Many stories posted by the Footloose Forester come from his old computer files.  This one was so difficult to write that he was reticent to re-live that horrible period.  And quite predictably, tears were forming as he added these last lines. Legacy Stories is, however, about our memories of the past.  Let us never forget that we are here on earth to love one another.

Upon re-reading this short chronicle in late 2017,  the tears came again.  All men are brothers and all women are sisters.  Why do we treat each other with such cruelty?

The running total of hits on this short piece exceeds 21,000 but there has never been a single comment made by way of feedback. Nonetheless, better to publish and attract readers than to assume that the chosen subject doesn't matter to them.

The running total of hits on this short piece exceeds 21,000 but there has never been a single comment made by way of feedback. Nonetheless, better to publish and attract readers than to assume that the chosen subject doesn't matter to them.
Cancel Update Comment
Follow