May 30 Posted by Dick Pellek in Legacy Story

The Footloose Forester has been a life-long splitter: dividing seemingly simple observations into more refined, detailed considerations into the possibilities about the presumed complexity of those observations. A photograph of a landscape can rightfully be described as merely a photograph. No argument there.  But what about the contents of the scene in the photograph? Are they not the goal attained by taking the photo?  Does not the photo deserve to be described or explained to anyone who asks about it?

A lumper might shrug and say, all I see is a photograph. A splitter might say, the photograph shows an outdoor scene, presumably taken in the winter (because of snow on the ground) and depicts deciduous trees (because some of the trees are leafless) and coniferous trees (that show their green needles).  The splitter might say there are six trees in the photo, with a presumed average height of 15-20 feet for the deciduous species and 50-60 feet for the conifers.  She might go on to say that, based on the height of the trees and their approximate diameters, the photo depicts a scene from a forest or field that shows an intermediate stage of maturity; neither the sapling stage, nor an old-growth or fully mature stage.  The splitter might also suggest that the air temperature at the time the photo was taken was above freezing because of the presence of intact icicles and even a few drops of water, further suggesting thawing.  A splitter can go on, and most splitters relish the challenge.

Random stimuli sometimes generate themes for contrived chronicles, one reason why the masthead of the Footloose Forester is labeled Essays, Stories, Adventures, Dreams.  The current chronicle is being fabricated from a meeting that was not random, but one with a known lumper.  With his permission requested but not quite approved or denied, the Footloose Forester kind of knew that his friend the lumper would engage in, and bounce around in, a broad array of topics.  We were, after all, friends and professional colleagues who have been expressing plenty of opposing viewpoints for more than 40 years.

And the stage was set for the most recent back-and-forth about approaches to viewing the world and things around us.  When the splitter (the Footloose Forester) mentioned that he likes to put diced mango into his breakfast granola, the lumper (long-time friend) asked a general question about mangoes.  Yes, the stage was set and the lumper seemed to be the stage manager.  Splitter (S) expressed his desire to see a better selection of mangoes in supermarkets; and almost immediately Lumper (L) chimed in, a mango is a mango.   The game was on.  The easy response from (S) was one he had used before:  there are 1000 varieties of mangoes and they don’t all taste the same.  My friend (L) said that he buys what is in the store.  (S) said that he doesn’t buy (names three varieties) that are sometimes stringy, and do not satisfy his taste buds.  (L)  retorts, at more than one point, that (S) is a connoisseur and a bit snooty, to boot.  Not to worry, at this point.  The (S) wanted to impress upon (L) the fact that of the 1000 varieties of mangoes, most are never found in supermarkets because of limited production and marketing issues, even so, (S) doesn’t buy the three varieties he had already mentioned. On the other hand, he would buy a Pieri or a Hayden mango if he saw it in supermarkets.  Both varieties are uncommon in our local markets, due to limited production and market distribution.

One impetus to writing chronicles is shared by other writers.  Fantasy author N.K. Jemisin stated, “I’ve always thought of my writing as therapy…writing was the way I vented anger and stress and fear and longing and all the things that I did not have a real-world outlet for.”  For the Footloose Forester, his chronicles are reminders of things that he wishes to remember in terms of space and time, if necessary. He would prefer to hand someone a published chronicle that expresses what he believes than to get caught up in a he said-she said account of some vaguely argued debate in which the other side may insist of their version of events, based on nothing more than force major or unverified statements lacking documentation. 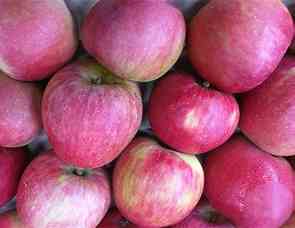 So, are there really two types of people, lumpers and splitters?  When comedian Garrison Keilor was relating a dialogue between a newcomer to Lake Wobegone and an old-time resident, the newcomer asked what kind of birds they have in Lake Wobegone.  The answer by the presumptive lumper was, here we have two kinds of birds...we have our big ones and we have our little ones.  It took a peaceful sunrise reverie by the Footloose Forester to recall that, as we sat in a tent at sunrise along the Senegal River, the then-Editor of the Journal of Ornithology mentioned that he could make out the identifying calls of over a hundred different birds that he was hearing at the time.  You might say that he was a splitter.

If there is any doubt that my friend is a lumper, the final thought harkens back to a couple of years ago when the Footloose Forester was at his house at lunchtime.  When he asked if Footloose Forester wanted an apple, he was met with a question, “what kind of apple is it?”  (L) quickly retorted, “what difference does it make, an apple is an apple.”  Needless to say, (S) responded that there are many varieties of apples, there are Baldwins, McIntosh, Winesaps, Granny Smiths, and Staymans; to name a few.