“To thine own self be true” is a dictum that has survived as a lesson in character building since biblical times. In being honest with oneself, most of us would admit to having a few regrets.  If confession is as cathartic as it seems to be, mostly during periods of private soul-searching and involuntary self-effacement; then it is time to acknowledge one of the biggest personal regrets that ever haunted the Footloose Forester.

He regrets not getting on a US Air Force plane bound from Hawaii to Viet Nam in late April, 1975 when Saigon was within days of falling to the Communist forces.  He was, at the time, a Graduate Student at the University of Hawaii and in the middle of some difficult course work that demanded his full attention.  Besides, he rationalized, he and his spouse Thu had already made arrangements for her half-sister Hue to obtain safe passage out of Viet Nam, by virtue of presidential intercession; and through the efforts of White House staffers of President Richard M. Nixon.  The personal letter originating from the White House assured us that she and her young son would be issued a visa to come to the United States, if she would just present herself to the US Consulate in Saigon and identify herself.  In addition, we had given her a one-way ticket to San Francisco before we left Viet Nam in the spring of 1969.

Unfortunately, Hue later acknowledged that she did not use; or re-new, the airline ticket we had purchased for her.  She belatedly told us that she cashed it in, so that she could feed her father and other family members.  So we had to seek other ways to get her out of Viet Nam before it fell to the Communists.  We were not hopeful, even in 1969, that South Viet Nam would escape communist rule.  That is why we set about petitioning the US Government to issue a visa, based on our pledge of sponsorship of Hue as a family member, which she was.  But we were turned down or discouraged by a US Congressman in Florida, where we were currently living; by the US Embassy in Saigon; by the US Regional Embassy in Manila; and by the Attorney General of the United States, who handles immigration matters through the Immigration and Naturalization Service.  But the Nixon White House said YES!

Fast forward to April, 1975…. as the fall of Saigon seemed imminent, we sent a cable to Hue instructing her to go immediately to the US Embassy with her letter from the White House and ask for her visa.  She did, on a daily basis for almost a week. The regrettable truth was that she was not physically able to force her way through the increasingly desperate crowds that swarmed at the locked gates.  At that time, US Marines kept vigil at the gates and stationed themselves on top of the walls, themselves; to keep people from climbing over. 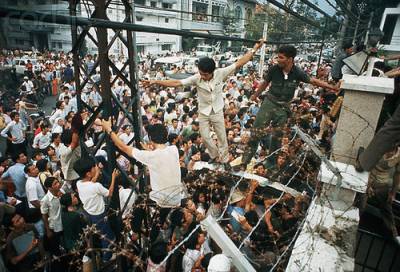 The Footloose Forester regrets not joining with his neighbor in Honolulu who called on the phone that day in late April, 1975.  The man was a friend; and former classmate at the University of Hawaii, whom we met shortly after we arrived in Hawaii in the fall of 1971.  Jim Morrow was also a former US Army Captain who had himself served in Viet Nam; spoke Vietnamese and had a Vietnamese wife. Jim and Bay Morrow lived down the street from us. As neighbors and friends with a common interest, Jim said that we had only a few hours to decide to get on that US Air Force cargo plane bound for Saigon.  No passport or airplane ticket was required; all we had to do was say yes, and the Air Force would send a truck to pick us up, and load us on that cargo plane bound for Viet Nam and a rescue mission. The deeply regretful Footloose Forester said NO. His Sister-in-Law Hue already had a promise of a visa, he rationalized.  She should be able to gain admittance on her own.

On the front page of Newsweek Magazine the following week, the Footloose Forester saw a picture of his neighbor Jim Morrow, straddling the wall of the compound at the US Consulate in Saigon. There he was; the tall but slightly built and undoubtedly tough Captain Jim Morrow.  He was wearing civilian clothes and was photographed punching a male civilian who was trying to climb over the wall in that hectic scene of desperation.

The man in the civilian clothes shown in the photograph below is probably Jim Morrow, as well.  But it has been 37 years since the Footloose Forester last saw and confirmed the identity of his friend Jim on the cover of Newsweek Magazine; and it was only by coincidence and after a dogged and serendipitious search of Viet Nam era archives that he saw the photo below, on 7 March 2013.  Jim was successful, however; in bringing out someone from his wife's family. 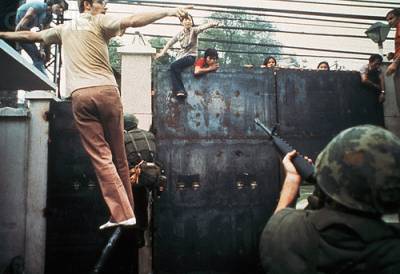 The man in civilian clothes may have been Jim Morrow

Regrets?  Yes, a few small ones here and there…but not getting on that rescue plane bound for Viet Nam was the biggest one that just will not go away.  It would take another 22 years to secure the release of Hue and her young son.  Due to her family relationship with us, the negotiations also involved a trip to speak with the United Nations Representative from (North Viet Nam) in New York and written correspondence with the International High Commission for Refugees. We presumed that Hue was living under a black star, because of us.