As the guest speaker at church was announcing the upcoming hunting event sponsored for wounded veterans, she described one or two of them who had lost limbs during military service, yet found a way to become archery hunters.  Sitting in his pew, the Footloose Forester was privately embarrassed that the discussion triggered a recollection about the Viet Nam War that was never flushed out of his thoughts.  It is not known if the person who died that day was soldier or civilian.

In the early morning light, as the A1-E Skyraider passed low over our house, the Footloose Forester could clearly see the two red bands painted on the bombs hanging from underneath its wings, and heard the sound of the mechanism that armed those bombs. He followed the flight of the fighter bomber as it released its payload, not far away.  The ensuing explosion could not be seen clearly over the tops of other houses in the densely populated neighborhood, but the carnage could. The twisted body of a man in civilian shirt and long pants rose some 30 feet into the air. Another mental photograph was thus registered in the files of things that are never forgotten. Numbed silence followed. Perhaps we are not able to process such gruesome events, thus we tend to bury them deep into our mental archives. And there they remain until something triggers their release. 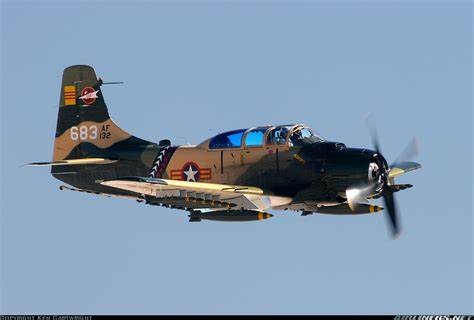 For many years the Footloose Forester could not explain why the exploding bomb did not produce a visible shower of concrete and wood from its hit on the house, but signaled its devastation in the form of a single body thrown high into the air. In a moment of detached clarity, he realized that the man was one thing in the house that was not initially nailed down.

There is a certain catharsis in telling this brief tale.  Perhaps most people cope with sadness and loss in other ways, but a Footloose Forester long ago accepted the premise that is written on a sign inside the macabre museum of the concentration camp at Dachau, Germany—NEVER FORGET.

How is it that the Footloose Forester can remember such details, some 50 years after they happened?  Hardwiring of certain events into the brain is the probable answer.  That, and the coaxing of sub-conscious thoughts during his dreams.  One reason why the masthead of this seminal Chronicles of a Footloose Forester includes the words Essays, Stories, Adventures, Dreams is that some of the most recalcitrant thoughts emanate from dreams like the one last night. Part of that dream was an addendum to the events that occurred during the Viet Nam War, on that very same rooftop where the Footloose Forester sat to observe whatever he could of the warfare and dangers that were closing in. In a few stories he has described his abode as a house, but in reality, the place was a very small and very inconspicuous apartment building that had three floors of living space and a short set of steps that led to a narrow roof.  And the predawn hours before the sun came up was the time he preferred to patrol his neighborhood with his eyes.  During one of those pre-dawn patrols, he heard the unmistakable sound of a rocket headed his way.  As the 122mm rocket swooshed overhead, he could clearly see the flames coming from its tail; and shortly afterward hear the crump of the explosion in the same general vicinity of where the Skyraider had dropped its bombs.

In religious circles, we are often admonished to bear testimony. Religious people know what that implies. In these Chronicles of a Footloose Forester, the one bearing testimony is now doing so but, using an alternate expression, is also bearing witness.  Ernie Pyle, a World War II wartime correspondent who most famously wrote the Guadacanal Diaries bore his testimony with his own hardwired details.  He was a gifted writer who also bore witness from the battlefields that he did not want to be forgotten.

Your way of telling all in this article is really nice, every one be able to without difficulty be aware of it, Thanks a lot!

Your way of telling all in this article is really nice, every one be able to without difficulty be aware of it, Thanks a lot! :)
Cancel Update Comment
Follow