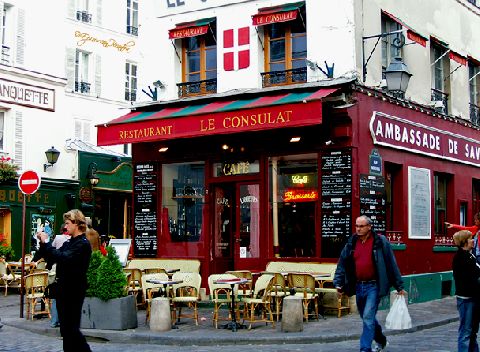 Once again, thanks to the Internet and the power of sharing photos attached to e-mail messages; and those found on web pages, the Footloose Forester was able to recapture more memories of the Montmartre District of Paris, France. In 1963 when he was enjoying a 3-day pass with Brother Joe Pellek, the Footloose Forester sat with him at one of the tables (on the right) shown in the restaurant depicted in the photo. There was no mistaking the restaurant and no mistake about the logical decision of the present restaurant owners to put those tables where they are shown in the photo, taken perhaps 50 years later. It was also during one of those short-lived fads when the French were fond of wearing T-shirts with Fruit of the Loom logos. We had fun counting how many Fruit of the Loom logos we saw as we sat there enjoying our lunch.

The charming streets of Montmartre have as much appeal now as they did then. Anyone walking those streets will be drawn to that intersection and that particular restaurant on Rue Norvin, just as naturally as a mouse is drawn to a trap holding a tasty treat. Our good fortune back in 1963 was having our choice of seats. As a pragmatist, the Footloose Forester suspects that the tables and chairs are not now the same ones we occupied in 1963. But the street is the same, the restaurant Le Consulat is the same, and the memory is unaltered.

Dogs Of War Coup Master Was A Real Mercenary

France Was Always A Bit Special