E is for Ethiopia

The highlands of Ethiopia are among the most beautiful landscapes on earth.  To see things that way, one must always remember that beauty is in the eye of the beholder.  So, to find beauty in the rugged barrenness of semi-desert, stark mesas that are miles long and thousands of feet high, forested uplands that are nearly uninhabited, and the ever-changing transition from one tableau to another; is to discover that a fascination goes along with the beauty. Then there are the hot springs, the mud pots and the extinct volcanoes, some containing grey, soupy lakes in which pumice boulders bob about like huge corks.

The Footloose Forester always tried to retrieve a few pumice boulders each time he went to Ethiopia. Sometimes he collected them from the lake inside a caldera, other times from the shoreline where the wind had blown them ashore.  To this day, the last remains of a few float-on-water pumice boulders can be found in the rock garden outside the Pellek residence, alongside the specimen of “pahoehoe” lava that Footloose Forester picked up at the 18,500 foot level on Mt. Kilimanjaro in Tanzania. 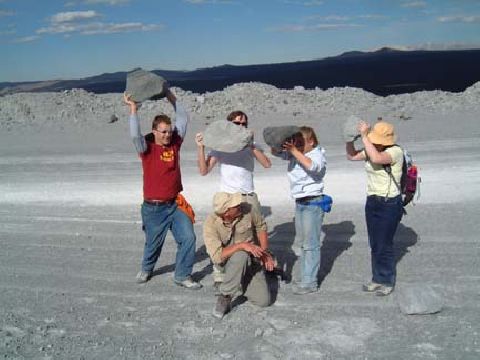 Pumice boulders can float in water

Ethiopia is also a place where a hang glider pilot can step off a hillside and glide down some 80 miles to a safe landing zone, conveniently located next to a main road. A thorough check of overlapping topographic maps would confirm such a possibility.  In his many daydreams, the Footloose Forester sees himself stepping off that grassy upland pasture and winding his way down valley walls, while comfortably seated in the webbing of his paraglider.

Addis Ababa is as cool in summer as any city you will find in Africa.  At over 8,000 feet above sea level, the capital of Ethiopia has its own charm, part of which is a cultural legacy of years of Italian colonization. Freshly made and authentic lasagna and old world pizza are always popular among Westerners who travel throughout Ethiopia. On the other hand, the Footloose Forester always appreciated taking a warm morning swim in the dead of winter, in the large hot springs pool on the grounds of the Hilton Hotel.

The First Home I Remember
My Special Relationship with Opoe

You know, Ethiopia has always been an unknown for me! Your story makes me want to experience the beauty of that land and the Italian food heritage.

You know, Ethiopia has always been an unknown for me! Your story makes me want to experience the beauty of that land and the Italian food heritage.
Cancel Update Comment

Thank you for your response, Patricia. Ethiopia can be a very Interestibg place.

Thank you for your response, Patricia. Ethiopia can be a very Interestibg place.
Cancel Update Comment
Follow