On the road...again!!!
Afghanistan to Zambia

There is no getting around the fact that the pets in the life of the Footloose Forester provided thousands of pleasant memories. Some people say that you can love a human, but then shy away from using the word “love” when it comes to pets.  Who really cares about the semantics, and what other people think about loving or not loving pets?  The dogs and cats in his life were closer to him than most human beings could ever be.

This memoir will never be adequate, but it will give the writer great pleasure in the attempt to capture some of the joyful moments of his life.  Where to start and how to proceed will be an adventure, in itself.  He might as well start with the first thought that popped into his head. It would be about our dog Dolie, the female mixed longhair breed that did the most traveling.  Dolie, the traveler, was the one who was born in Pennsylvania but lived in other countries where she accompanied her family; first, to West Africa, then to Haiti.

Warm first memories of Dolie are about her as a jogging partner for Footloose Forester when they lived in Pennsylvania.  He routinely jogged in the neighborhood and she always wanted to go with him.  Usually, it was early enough in the morning that he did not even think about putting her on a leash.  Yes, there was a leash law in Findlay Township, but he resisted following that law every time he could get away with it.  When it was still dark, or when he went to the woods on a job, or merely to explore, he let Dolie run free. There was a leash in the car, and he used it in cases of doubt, or where there were farm dogs too close to where he came and left the woods. But part of the pleasure was always seeing Dolie run free, the way dogs are meant to be.  There was a difference, however, in her attitude when it came to jogging.  Dolie liked to run, but not too far.

Morning jogs were usually in response to favorable opportunities or the current circumstances, such as when he didn’t have a job, or when he had enough time. The more time he had free, the longer the jogs. Dolie was always eager to start, and they began by turning left along their property line. The property line to the left was the starting point. Dolie knew exactly where that property line was. The joggers followed one of several courses; usually the short course along the horseshoe-shaped Escalon to the corner of Escalon Drive and Cranbrooke Drive; and then back along Cranbrooke until they passed their house and ended up at the starting point at the property line on Escalon beyond the house.  As time and circumstances permitted, we doubled the loop on Escalon and added a leg up to the end of Cranbrooke where we turned around.  That route was about 1½ miles.  Eventually, the Footloose Forester expanded the range to 3 miles, then to four or more.  When he and Dolie worked up to the 6-mile route, Dolie got smart. She jogged cheerfully to the end of the property line, flopped down and then waited until the Footloose Forester showed up on his return leg.  She did this every time she thought that it was going to be a long run.

Dolie loved to chase rabbits.  There were plenty of them when we first moved to the house on Escalon Drive.  In the early evening, she waited for us to go out with her around the neighborhood so that she could chase rabbits.  Then, when we took a job in the semi-arid country of Cape Verde, she discovered that although there were very few rabbits there, she could chase wild guinea hens in the hills around our rural residence.  She never caught a guinea hen because they were much faster than even the occasional rabbit.  One time, however, Dolie did see a rabbit close to our house and set into immediate pursuit. The poor rabbit was so frightened that he made a wrong turn and Dolie actually caught up with him.  Gentle Dolie killed that rabbit.  When we caught up with her, she actually showed shame on her face.  It was the first rabbit she had ever caught up with in Cape Verde, and it was clear from that look in her eyes that she did not intend to hurt the rabbit. Her chasing game had gone awry.

Getting to Cape Verde in the cargo hold of an airplane was a worrisome affair for Dolie.  Thu arranged for the flight out of JFK in New York, and it cost over $700 to send her in an animal carrier.  Thu’s ticket cost only $400 or so.  Money was never an object when it came to her pets, but Footloose Forester did not learn of the travel details until the very end of the trip. As it turned out, there were several bittersweet moments in the final hours of transit.

As he waited for her arrival at the terminal on Sal Island, Cape Verde, he could see the South African Airways jumbo jet carrying Thu and Dolie taxi into the terminal area; and he watched for their deplaning. Thu came into the terminal and announced that Dolie would be released from the cargo area shortly.  She was not.  When Footloose Forester went to the doorway to look for more baggage being offloaded, in the background he could hear Thu talking with the ticket agent, who spoke English. When the young girl patiently told Thu that there was no dog scheduled for offloading at Sal Island, Thu insisted that she check for herself in the baggage area.  Then Footloose Forester heard something that he will never forget.  Thu said, “He loves that dog more than he loves me, so my dog better be back there.”  There was no dog in the baggage area.  At that stage, she further insisted that we be allowed to check within the airplane, itself.  That was when the baggage handlers discovered a barking dog that heard the voice of Footloose Forester.

They put the animal carrier on the tarmac and opened it.  Footloose Forester remembers being bowled over and lavished with nearly a hundred kisses as he lay flat on his back on the hot tarmac and in the blazing sun.  One of the happiest moments of his life?  Oh, yeah! 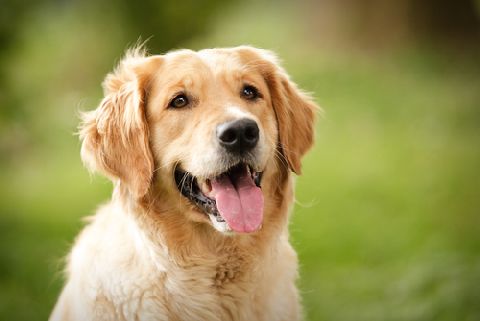 Dolie was a mixed breed retriever, just as pretty as this one

We had to change to a small, two engine prop plane for the 30-minute flight to Sao Tiago, the island where we lived.  The short runway on that rugged volcanic island could not handle jumbo jets because the runway was too short.  Of all the Cape Verde Islands, Sal Island was the only one that could handle jumbo jets in those days. The even shorter runways on all the other islands always made for exciting experiences.  But packing that bulky pet carrier in the limited cargo space of the prop plane owned by Transportes Aereos de Cabo Verde meant that the Footloose Forester and Thu had to pass within arm’s reach of Dolie when they entered through the door to the passenger’s cabin. Dolie saw them--and barked her displeasure about her separation all the way to their destination.  The other passengers were annoyed at the noise.

Dolie insisted on going to the field with the Footloose Forester, wherever that was and whenever that was.  In the warm, dry conditions of Cape Verde that meant that the passenger side window on his project vehicle was always open.  It was forever a joy to see her big ears flapping as she poked her head out to inspect her surroundings. On weekends the family usually went to the beach; to swim, to fish, or to explore the coastline.  Dolie always went along.  She did not usually show an interest in swimming, but she did go in if she thought that the Footloose Forester was in danger.  One time when he was nearly a hundred yards offshore and beyond her recognition as she patrolled the beach, she barked up a storm when she lost sight of him.  When he called out, she jumped into the surf to swim out to rescue him.  He usually did not stay in the water at those times because sometimes there were jellyfish that she could not see.

Exploring on land often was not any easier because of the rough surfaces of the volcanic rock, or the sandburs. One time when Footloose and Dolie explored alone, they went more than a mile beyond the beach everybody knew.  They found a very small white sand beach that they had all to themselves.  It was so remote from where people lived and the coastline was so inaccessible, they knew that it was special.  Beaches of white sand are not really common in Cape Verde.  The dark basaltic parent material of many beaches was black—and hot to the feet.  On the way back, just shortly after leaving the water line, Dolie sat down and; with her eyes, told Footloose that she had a problem.  When he approached, she lifted her paw to show him that she had walked through a patch of sandburs.  The sandburs were tough and they were nearly everywhere.  After removing a few burs from between her paws, he knew it was going to be a long trip back to the main beach where Thu was waiting.  He hefted her 80 pounds on his shoulders and, at that moment, added a precious memory for a future daydream.  It seemed like a longer trip back, with the extra 80 pounds on his shoulders. 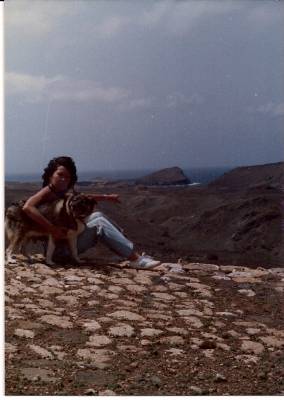 Dolie and Thu on the desert pavement of Sao Tiago, Cape Verde

In the photo above Dolie and Thu rest on a windswept ridge overlooking the desolate shoreline of Sao Tiago Island.  Notice the desert pavement of remnant stones too heavy to be blown away by the wind.  Notice also that there is not a single green leaf anywhere.  It was tough for Cape Verdeans to make a living in such an environment.

It would not be the only time that Dolie had a problem with her paws.  A few years later, the bottoms of both front paws became separated and bloody along a rocky trail.  That episode was in Haiti when she and Footloose Forester were climbing the trail beyond their house above Port-au-Prince, to the main mountain road near Kenskoff. Most of the trail was rocky, but Footloose was not aware that anything was wrong until they were on their way back down.  Again, Dolie just sat down at the side of the trail and refused to get up.  Once again, she offered up her paw to show that she had a problem.  She got another ride on his shoulders; and a later trip to the vet.